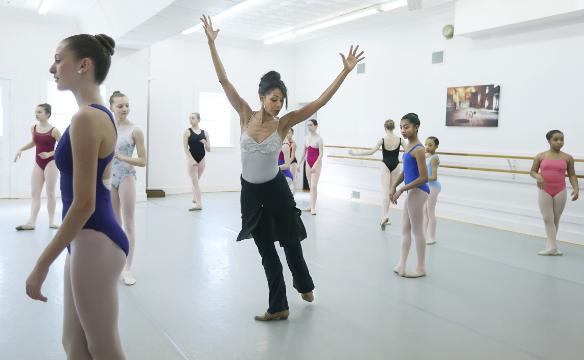 Just before her 15 young dancers took the stage at the Edgerton Rec Center, Aesha Ash separated them for a pep talk.

“It’s okay to be nervous,” she said quietly. “It just means that you care.…

“I’ve seen you all transform from your first day at camp so far, and I’m so, so proud. Take all of those nerves and energy and put them into a spectacular performance.”

The girls, aged 5 to 13, wore purple socks from Altitude Trampoline Park on Jefferson Road, not ballet flats. The public were their parents; the stage was the floor of the Edgerton Rec Center Ballroom, demarcated with blue painter’s tape.

And yet, Ash, the Rochester native who had retired from a famous dance career around the world, could relate to them. She hoped they could recognize themselves in her too.

“There is something about coming back, not just to my hometown, but to a setting like the one I grew up in,” she said. “Being able to reach out to these children is amazing.

Ash, 43, grew up in Rochester and studied dance locally before moving to New York at age 14 to join the prestigious School of American Ballet, where she has now become the first black woman in the permanent faculty.

She then danced for 13 years with the New York City Ballet and ensembles in Switzerland and San Francisco.

Following:Aesha Ash danced from a modest life in Rochester to the New York City Ballet

Since retiring, she has devoted her energy to motherhood – her husband and two children were at the show on Friday – as well as the Swan Dreams Project, a multi-faceted outreach effort that began with a series of photos of Ash dancing. in the Rochester neighborhoods.

The positive response to these photos led to a series of weeklong camps, including one last week.

“It’s nice to have that kind of representation, especially at this caliber,” Hale said of Ash. “It lets the girls see what’s possible.”

Kenyatta Coleman, 9, had never taken dance lessons or danced for an audience before Camp Ash. She did well enough to win a one-year scholarship to the Odasz Dance Theater, a local school.

“Mrs. Aesha and the other teachers are so nice,” Coleman said. “She helped me when I was nervous and when I was falling.”

The performance has started. Some dancers were fluid, others wobbly; most of them had more enthusiasm than technique.

When they looked up, they saw Ash – perhaps the greatest dancer in the long history of the ballroom – dancing directly at them.

“They are fearless, fresh and new,” Ash said. “If I can be a positive influence, they can hopefully prevail for the rest of their lives.”