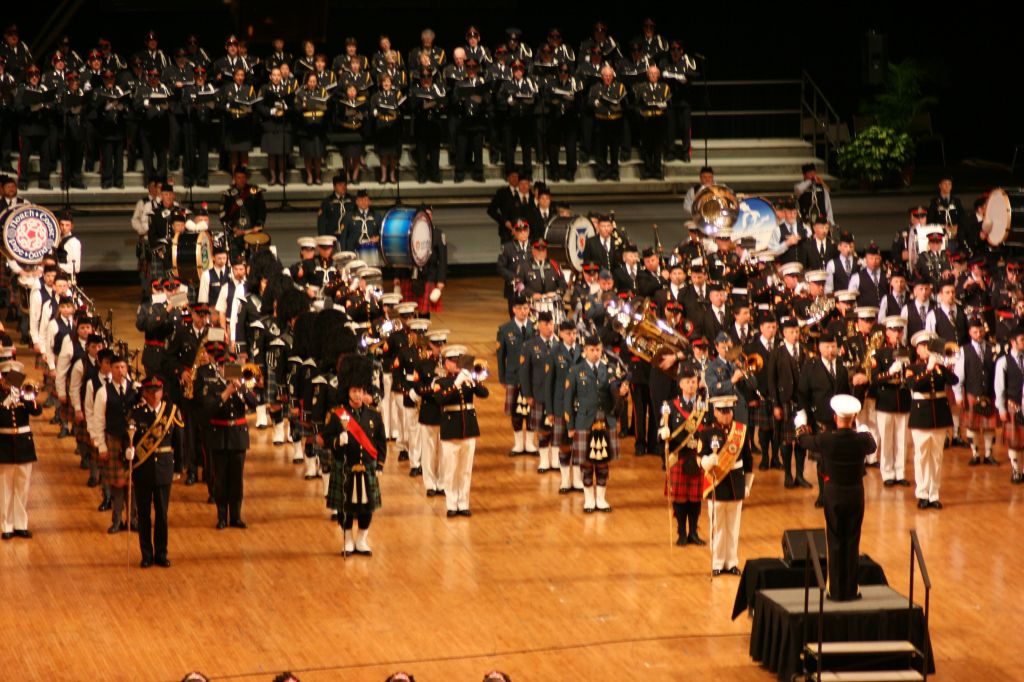 Filling Cleveland Public Auditorium with pageantry, music, singing, drill teams and dancing, the Cleveland International Tattoo is an event you might consider attending on May 21st. It concludes the somber National Police Week commemorations to area police officers who have died in the line of duty.

“The Tattoo ends the Police Week celebration on a high note, celebrating the ethnicities of the area,” said Joe Gaither, director of the Cleveland International Tattoo.

The name “tattoo” has nothing to do with the art of inking applied to the skin, but is instead derived from the 17th century Dutch phrase “doe den tap toe” (translation: turn off the tap), a signal given by drummers or trumpeters to tell innkeepers near military garrisons to stop serving beer for soldiers to return to their barracks.

Ceremonial tattoos have been around for centuries, but in Cleveland, the connection to deceased police officers began in the late 1970s.

“That’s when pipers and drummers from Chicago and New York came here to found the Cleveland Police Pipe Band,” Gaither said. “The first Tattoo in 1987 was in a bar, but people loved it, and after that the Tattoo grew so quickly it moved to the Cleveland Armory and now it’s in the Public Hall.”

The Cleveland Public Auditorium, 500 Lakeside Ave. E., can accommodate 6,000 people. This year, 1,300 are expected for the Cleveland International Tattoo.

In 2014, attendance approached the 6,000 mark, but has since fallen, Gaither said. The pandemic has shut down the Tattoo for the past two years, but this year it’s back.

In addition to the four bagpipes, music will include that of the USMC Marine Forces Reserve Band, New Orleans; North Coast Male Choir; and a pair of high school bands. Also in attendance will be the US Coast Guard Honor Guard Silent Drill Team from Washington, DC; Cleveland Police Honor Guard; Ohio National Guard Honor Guard; City of Akron Schools Joint JROTC Color Guard; and the Sons of the American Revolution Color Guard, of Columbus.

Dance troupes will include Scottish Highland dancers from the Jenny May School of Dance based in Mayfield Heights; Egan Irish Dancers, of Chester Township; and Ukrainian dancers from Kashtan, from Cleveland.

Jenny May, who has been teaching Scottish Highland dance for 30 years, said the competitive dance form was developed in Scotland in the 19th and 20th centuries.

“The moves are ballet-based,” she said. “It’s a competitive and technical dance form that requires technique, endurance and strength.”

Those interested in classes or wanting to book a show can call 440-781-7556 or visit jennymayschoolofdance.com.

Here are the National Police Week events leading up to the Cleveland International Tattoo.

8:14 a.m. May: Greater Cleveland Peace Officers’ Memorial Plaza, Huntington Park, Lakeside Avenue and West Third Street — Ceremony and placement of headstone. After a brief ceremony, volunteers will travel around the area to place markers at the graves of the officers commemorated on the Memorial.

10:30 a.m. May 20: Parade from Lakeside Avenue and East 12th Street to Greater Cleveland Peace Officers Memorial Square, Huntington Park, Lakeside Avenue and West Third Street—Participants include officers from local, county, state and federal agencies across the United States and Canada, as well as surviving family members of officers who made the supreme sacrifice. The staging of the parade begins at 9:30 a.m. The memorial service follows at 11:30 a.m. in Huntington Park.

Tickets: $25 for adults (one free ticket for one person 18 and under is included with every adult ticket purchased, with additional children’s tickets available for $5 each).