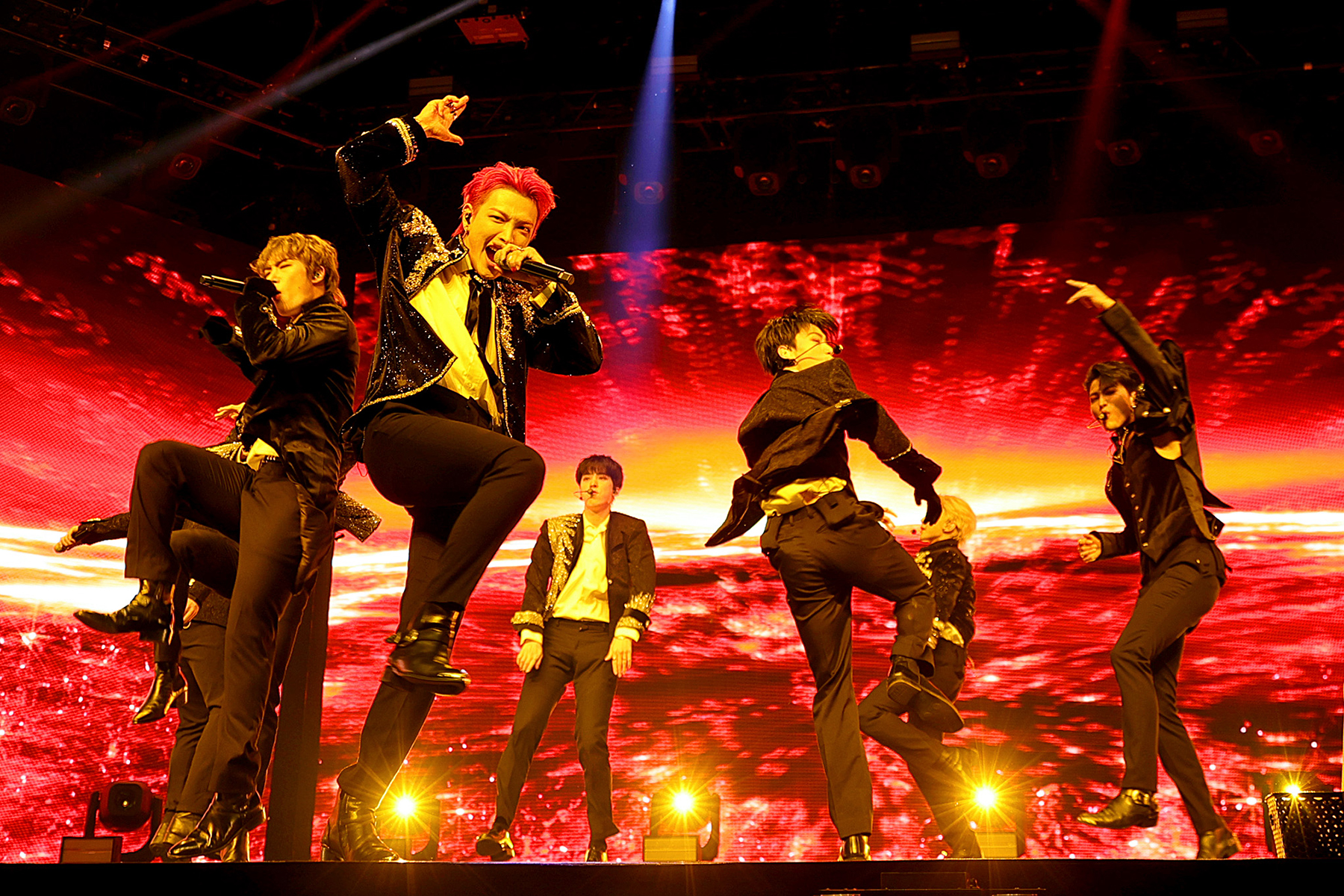 The Korean word yeoyu (여유) has no direct English translation. It’s essentially a sense of ease – and on stage, the idea that there’s an inherent freedom in every movement of a performer that allows the whole performance to breathe.

It’s one of those concepts that you have to see with your own eyes to truly understand. Either you have it or you don’t. Three years ago, in an intimate room in Brooklyn, the South Korean group ATEEZ gave a glimpse of it. And when the eight members took the stage at the sold-out Prudential Center in Newark, New Jersey on Monday night, it was unmistakably clear they had it. With every sly eyebrow, every arm swing, and every unwavering belt, ATEEZ performed with the skill of a band that has nothing to prove – when in fact, they’re just getting started.

It’s not like doing this show, let alone this world tour, doesn’t come with a ton of pressure. After a nearly three-year tour postponement, ATEEZ were one of the first Korean groups to perform internationally since the pandemic began, and thus helped carry the mantle of hosting the K -pop in the United States. And to top it off, this show — the third on the tour’s current US run, following stops in Chicago and Atlanta — was the biggest venue of their careers to date. Last time they were in town, they played to an audience of 800 – about the size of their soundcheck performance for VIP ticket holders before the Newark show. Last night when the curtain fell, they stood in front of nearly 20,000 people.

It’s hard to pinpoint a single factor that has led to ATEEZ’s unreal growth since their debut in 2018. It’s surely a testament to the accessibility of their music, spanning everything from fiery trap beats, EDM and R&B to tropical house, and often peppered with eccentric production flourishes. Their visuals weave together a colorful narrative featuring pirates, time travel, and dual identities. (If there’s one thing you’re bound to see at an ATEEZ show, it’s the fans dressed in black and red and adorned with silver chains.) But beyond their expert showmanship and of their bold aesthetic – essential from the start when trying to stand out in the competitive and crowded landscape of K-pop – emphasizes fostering a close relationship with fans, called ATINY (a portmanteau of ” ATEEZ” and “destiny”). Not only did they make sure to meet them one-on-one right from the start of the tour (less than six months after their debut), but they’ve also continued to host intimate fan events ever since. Pre-pandemic meant everything from show up at dance get-togethers at join reaction videos. During means to hold FaceTime fan calls virtual and in-person concerts fansignseven through glass.

From the start, this show promised high-octane energy, as Hongjoong, Seonghwa, Yunho, Mingi, San, Yeosang, Wooyoung and Jongho, dressed in sparkling black and white military jackets, burst onto the stage. featuring fan-favorite hits. like “Wonderland (Symphony No. 9)” and “Pirate King”. As Seonghwa brandished a sword, holding it triumphantly in a manner reminiscent of their first pirate-themed concept art, the message was clear: ATEEZ is stepping forward fearlessly and inviting fans to join the ride.

Then came the time for opening remarks – one of many, as well as recorded video interludes that would spice up the long list of sets throughout the night. That’s right, the group had prepared 27 songs – a tall order for any performer, let alone those who sing while performing complex choreography. “We promise to show you an amazing performance so you won’t remember the two years you had to go through,” rapper Mingi said in his low baritone. “Okay, sailors!” San shouted emphatically at the fans. ATINY shouted back, waving their glow sticks in the air. “We have prepared well and are finally ready to sail. We will do our best to make the ship have a good trip. They launch into “Say My Name,” a song that features ATEEZ’s unique blend of explosiveness and swagger, then the sonic twins “Treasure” and “Precious,” before leaving the stage for a costume change.

The band returned wearing different variations of silky white costumes, setting the tone for the next brighter chapter of the show. After the 20-somethings shared their recent dreams (eventually used as a link to their song “Inception”), then quickly achieved an arena full of dreams by throwing a Song “Daddy” (directed at their boss in the audience, the CEO of KQ Entertainment – but still), the dark moodiness turned into hot pinks and sunset palettes as they delved into their older discography. pop. This is where Jongho’s powerful vocals really had their moment, especially on the anthem “Utopia” and a (chaste) little snippet of Bruno Mars’ “Versace on the Floor.” As the youngest member flexed his monstrous range of belts without faltering, gasps and excited shouts erupted from the crowd. It was also a time when the band almost took a break from dancing – but no, good try. In came the choreography as “Wave” hit its second chorus.

The crescendo of shimmering colors and summery bops culminated in what was perhaps the most surprising highlight of the night: “Take Me Home,” a 2021 B-side. Zero: Fever Part.2. Beginning with a blindfolded San, the members took turns dancing in front of textured silver mirrors, reflecting the same soft sensuality as the Weeknd-esque track. A moaning saxophone solo added the finishing touch.

Other highlights include the drama “HALA HALA,” during which the octet dances so lively that the only way to end the song is to mime breaking their necks; “Rocky”, in which Mingi emerged wearing a boxing robe and belt; and “The Real – Heung Version,” a catchy anthem with traditional Korean instruments that sent the entire arena into a party frenzy.

After the classic K-pop charade of pretending there would be no encores, a six-minute video was released featuring interviews with the members. They talked about the excitement of holding their first world tour in 2019 and the depth of the pandemic and the postponement of the tour that has affected them. “It felt like all our hard work was wasted,” Yeosang said. They then shared how they felt about finally getting back on the road. “At the end of this chapter, I will have grown up,” Yunho said. “I always thought there was always a new beginning with every ending.”

ATEEZ came out in their own merchandising to perform the final four songs, opting for airy ballads rather than a punchy button to end the night. Despite his best efforts to hide it, leader Hongjoong broke down in tears during “Star 1117,” later admitting during the farewell that he sometimes thought during the pandemic that he would never meet his fans like that again. But the 23-year-old’s final thoughts were more positive: “Finally, look forward to what’s to come.”

A fun dig at ATEEZ was that they “overperform” – that their flair for drama and camp is kind of a hindrance to their power as a group. But it was actually this very trait that allowed them to electrify an entire arena, even without the added benefit of the extended stage that had been factored into their pre-Covid setup. ATEEZ’s commitment to their performances – training so much that the choreography is muscle memory, moving like their life depended on it – gives them the freedom to truly enjoy and push your limits. To really let their performances breathe. And last night, it was like a giant exhalation.

ATEEZ World Tour (The Fellowship): The set list from the beginning of the end

‘Cheer’ is back and better than ever // The Observer