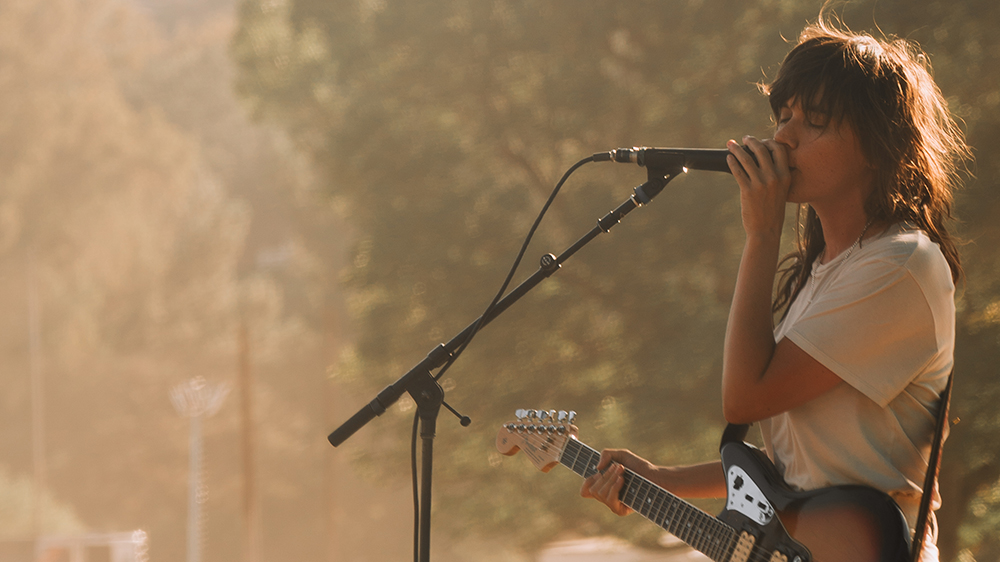 The Brookside Golf Club at the Rose Bowl has seen a lot of foot traffic in recent months, much of it unrelated to the sport. The expansive course has become an ideal setting for several music festivals and cultural events, including This Ain’t No Picnic, which landed in Pasadena last weekend.

The two-day all-ages, family-friendly festival — named after the song Minutemen — boasted a bill that sounded like an NPR playlist. A clear replacement for LA’s defunct and sorely missed FYF Fest, This Ain’t No Picnic had something musical for everyone – pop, hip-hop, dance, punk and rock. were well-represented genres – and featured the genre of leftist artists who have become darlings of the indie scene, like Phoebe Bridgers, Wet Leg, Beach House, Courtney Barnett (pictured above), and of the past 20 years, represented by Le Tigre, Caroline Polachek, and headliners the Strokes and LCD Soundsystem.

Amid the remnants of golf balls and broken tees lodged in the grass and dirt, a crowd of varying ages – say 25 to 50 – made up the majority of attendees, but the number of younger children present (those under the age of five received free entry), dressed in festival attire superior to that of their parents. The three-generational reach of festival-goers mirrored that of the programming, which covered artists from the 1960s to the present day.

There were two distinct poles at Ain’t No Picnic: the guitars and the turntables. On the Fairway stage on Saturday, Yves Tumor, who is channeling Andre 3000, with a band that appears to have been loaned out by Ozzy Osbourne in his Randy Rhoads days, crank it up to 11. The metal-studded cod piece of Tumor (which at one point needed a few tweaks accompanied by bumps from a roadie), leather thigh boots, bondage straps and spiked wristbands added to the staging they have in spades with music that is a cross between Joy Division and Billy Idol. The shredding continued on The Greens Stage with Magdalena Bay multi-instrumental producer Matthew Lewin. The duo’s feel-good jams play like Billie Eilish had emerged in the ’70s, except with frontman Mica Tenenbaum as the sun and rainbow K-pop cheerleader avatar.

Nigerian Mdou Moctar, who cut a fine figure in his iridescent kaftans and blinding white turbans and those of his band, tore up the Fairway stage on Sunday. His confidence flooded the crowd as he smiled, intermittently singing in his native Tamasheq, playing his guitar – without a pick – with fast movements in a “regular” way and on the top of the neck.

Elsewhere, it was the clash of cool girls with guitars when Wet Leg joined Phoebe Bridgers to close out her set.

On the Greens stage, Deafheaven, who was delayed, had his sizable crowd on the pins and needles. They’ve proven they’re worth the wait by delivering heavy bass, Cure-like sound. Also on this stage were the iconic, humorous and oft-imitated Sparks who entered their sixth decade in music. Dressed in all-black bar singer Russell Mael’s neon yellow pants, it’s not until they’re perusing their energetic set that you realize how many hits they’ve got: “Angst in My Pants”, “Tips for Teens”, “Music That You Can Dance To”, “When Do I Get to Sing ‘My Way”. Eccentric as always, Ron Mael’s keyboard reads “Ronald” instead of “Roland”.

If there was a common thread in This Ain’t No Picnic, it was that punk would never die. From classics like Circle Jerks, the Descendents and Mike Watt + The Missingmen to newer bands like the ever-popular Idles, new favorites Turnstile and Shame, the power and output of a punk rock ensemble cannot be denied. Circle Jerks reliably blasted out a song every two minutes or so, and Shame tried to do the same. The descendants ripped through their set with the intensity that comes from experience. The turnstile, one of the most notable attractions of the festival, drew an overflowing crowd. And Idles, which quickly became the main stage material, was in great shape. Even missing guitarist Mark Bowen, solid drummer Jon Beavis and emotive vocalist Joe Talbot delivered.

To bridge the gap between guitars and turntables, Jungle on the Back Nine Stage. To quote Spotify’s Carly Eiseman, the duo are “the Steely Dan of electronic music” and the crowd danced like a storm during the duo’s set. The performance reached a frenzy when they burst into The Bee Gees’ “Stayin’ Alive” – ​​fitting considering the bands have been compared to each other more than once.

At the opposite pole, Kaytranada led an eclectic set of dance-centric tracks on the fairway. The 19e Hole Stage, which featured an excellent line-up of ‘cool’ DJs, proved harder to get into. This was particularly the case of Honey Dijon who, fresh out of her collaboration with Beyonce, closed the evening.

The hardest area to grab was the Despacio is Happiness area by James Murphy and Soulwax/2ManyDJs. Despacio is dubbed the greatest sound system in the world, and for good reason. Absolute black except for the blue and green glow of McIntosh speaker stacks positioned around the black and white checkered dance floor, a giant disco ball in the center and a flashing red and white spotlight, provided very little visual on the DJ, which is part of Despacio’s philosophy. Working only with vinyl, the slow beats provided by Murphy and Soulwax’s Stephen and David Dewaele lend a sultry feel to the space – especially during a hard-hitting remix of another Bee Gees perennial, “Love You Inside Out “.