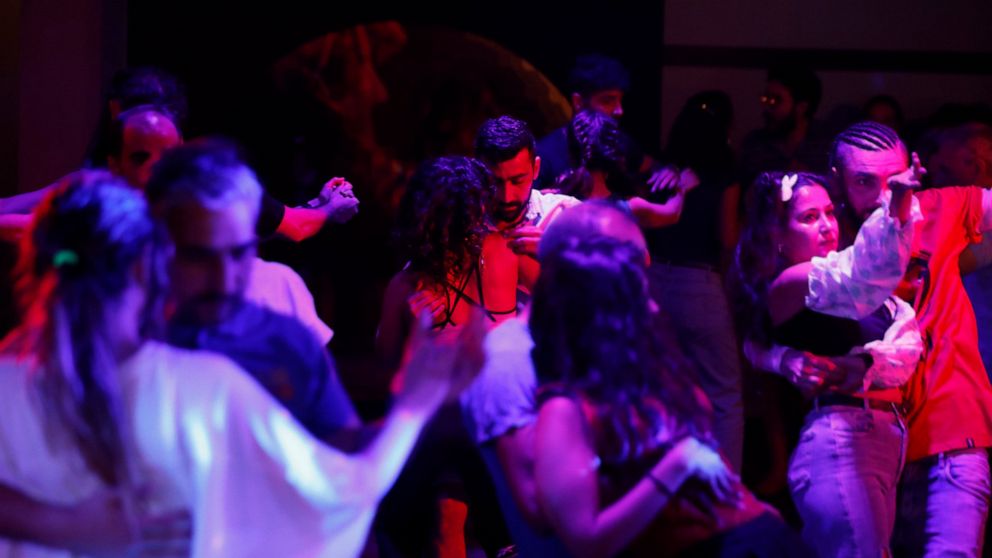 Far from war, Syrians find their rhythm in ballroom dancing

For an hour a week at a studio in Damascus, their instructor Adnan Mohammed, 42, teaches a class the basics of Latin dancing, helping his students forget the troubles of war, however briefly.

“They take out a different person,” Mohammed says.

For his students, ballroom dancing is a form of liberation, finding their rhythm in music far from the many social and economic pressures of their country. During this hour, they put the 11-year-old war in Syria, politics, anxiety about the economic crisis and the constant depreciation of the country’s currency out of their minds.

“They’ve put that energy aside and they’re starting to be optimistic,” Mohammed added. “I think we give them the energy to stay in the country. Now they have a reason to stay.”

The war in Syria, which erupted in 2011 following a deadly crackdown on anti-government protests, has killed more than half a million people and displaced half of the country’s pre-war population, which amounted to 23 million. With military help from allies Russia and Iran, Syrian President Bashar Assad has managed to crush the armed uprising against him, except for a few areas that remain outside government control.

In recent years, the lines of conflict have been largely frozen, but the war has caused unfathomable destruction in the country. A severe economic crisis has set in, and many are barely able to make ends meet.

Mohammed, who opened a dance school 15 years ago, says people kept coming to his classes throughout the war. But the biggest blow was when the coronavirus pandemic shut down everything, even his studio.

“People are exhausted these days, you feel a lot of frustration,” said Yara Zarin, an engineer who is also a teacher at the Dance Nation school, where Mohammed teaches.

Zarin explains that the school’s goal is not to disconnect their students from reality, but to provide the space where, for “an hour or two… you can be yourself”.

Dance schools offer classes during the week but also dance evenings. Small shows have recently made a comeback in the country, especially in and around Damascus.

Last month, a techno dance party held at an abandoned cement factory just outside Damascus drew hundreds of young people. With a laser show, music and dancing, it was one of the biggest such events since the start of the war.

Ballroom dancing schools were popular before the war in certain segments of society, including three major schools in Damascus that resisted the war.

For student Amar Masoud, dance classes are a “breath of life”.

“Sometimes I end up missing classes because I have to work,” he says. “But I still try as much as possible to ‘come to school.

Mohammed, the instructor, has a second day job to meet the expenses. He pleads for government support, to help bring dance back to a more organized setting and to what it was before the war. He dreams of representing Syria in international events.

“There needs to be a federation created just for dance so that it’s like before the war, where we were going to represent Syria in Arab and Asian countries,” he said.

For 30-year-old Maya Marina, dancing is a desperately needed outlet for war and hardship.

“Music takes us to another world,” she says. “Here I let off steam, it’s a respite from pressures, anger, difficulties.”