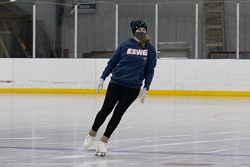 Competitive figure skating has lit a fire inside Amanda Demmerle since she was young.

Demmerle, of Camillus, NY, will be honored as ESWG Athlete of the Year in recognition of her off-ice character. With approximately 2,000 athletes expected to compete over a four-day period, the games are considered the largest multi-sport amateur winter sporting event in North America.

Kick-off also takes place on the same day as the opening ceremonies of the 2022 Winter Olympics in Beijing, on the other side of the world.

“The feeling is surreal,” said Demmerle, a double major in adolescent education: social studies and history who has regularly competed in Lake Placid at ESWG for the past decade.

She will compete in two events this year after statewide games were canceled in 2021 due to the COVID-19 pandemic. Demmerle, who has gone gold in several figure skating categories, will be looking to add to an ESWG awards collection that includes first and third place finishes from previous years. Individual game awards are presented in multiple divisions for first through third place.

“In most (figure skating) competitions, there are only figure skaters. You can’t interact with athletes from other sports,” she said. “When you go to the Empire State Winter Games, there are all these other sports and hundreds of people and this giant parade. You can hear their stories because we’re all there together.

It wasn’t Demmerle’s skating accolades, but her story of dedication that resonated with a panel of judges in 2020. She has competed against asthma and several injuries in recent years, including tendinitis in her ankle and a labrum tear at the hip.

She was chosen as figure skating athlete of the year from over 500 entries two years ago. The winning athlete from each sport then submitted a video introduction. An online voting contest selected Demmerle as the big winner.

“I like to think the reason I won was my love and support for the community – not just the sport, but anything outside of it,” said Demmerle, who skates four days a week and spends so much time teaching young skaters. and work in an after-school program.

She is a member of the Cortland Figure Skating Club, which is made up of local skaters from Cortland County and Central New York. Demmerle joined the group several years ago – long before she attended SUNY Cortland – because her home ice at the JM McDonald Sports Complex offers the opportunity to skate indoors in the summer. She said her teammates and coaches are like a second family to her.

“I think it’s partly because I had such a great experience at Cortland,” Jaime Demmerle said, noting that she often points out houses from her college days after trips to figure skating practices. “It was one of those things where everything lined up.”

Many figure skating club teammates, family members, law enforcement and local leaders, including SUNY Cortland President Erik J. Bitterbaum, joined Demmerle when the Torch Relay of the ESWG passed through Cortland on January 31 as part of a six-day, 700-mile voyage. .

“As a parent, you think of the quote, ‘Success may not be what I do for a living, it’s who I raise,’ Jaime Demmerle said. “I was so proud of her, she works so hard on and off the ice.”

Outside of training and competition, food and clothing drives are a staple of the Cortland Figure Skating Club. The close-knit organization also offered Amanda Demmerle her first experience as a volunteer teacher and coach in a “Learn to Skate” program.

“I got to see how young skaters learn,” said the aspiring teacher.

As a student at West Genesee High School, Demmerle was invited to join national honor societies for academics, dance, and Spanish language in addition to earning a biliteracy seal. She applied to SUNY Cortland because of the university’s reputation in teacher education and received a scholarship for her civic engagement.

“I applied to Cortland to become a social studies teacher and I knew when I applied that there were a lot of things I wanted to do,” she said, noting that she enjoys learning about story through travel and hope to study abroad in Cork, Ireland in the future.

But before that, she’ll head to Lake Placid – a winter sports destination with a rich history of its own.

“Lake Placid is amazing, especially because of the connection to the Winter Olympics,” Demmerle said, referring to the Adirondack Village’s hosting of the 1932 and 1980 Games. magical because you can compete in the same place where all those great moments happened.”

Soon, Demmerle will enjoy his own moment in the spotlight.

In addition to Amanda Demmerle, ESWG contestants with strong ties to SUNY Cortland include Isabelle and Lincoln Woodward. Their mother, Melanie Woodward, is the university’s associate human resources director and affirmation action manager.