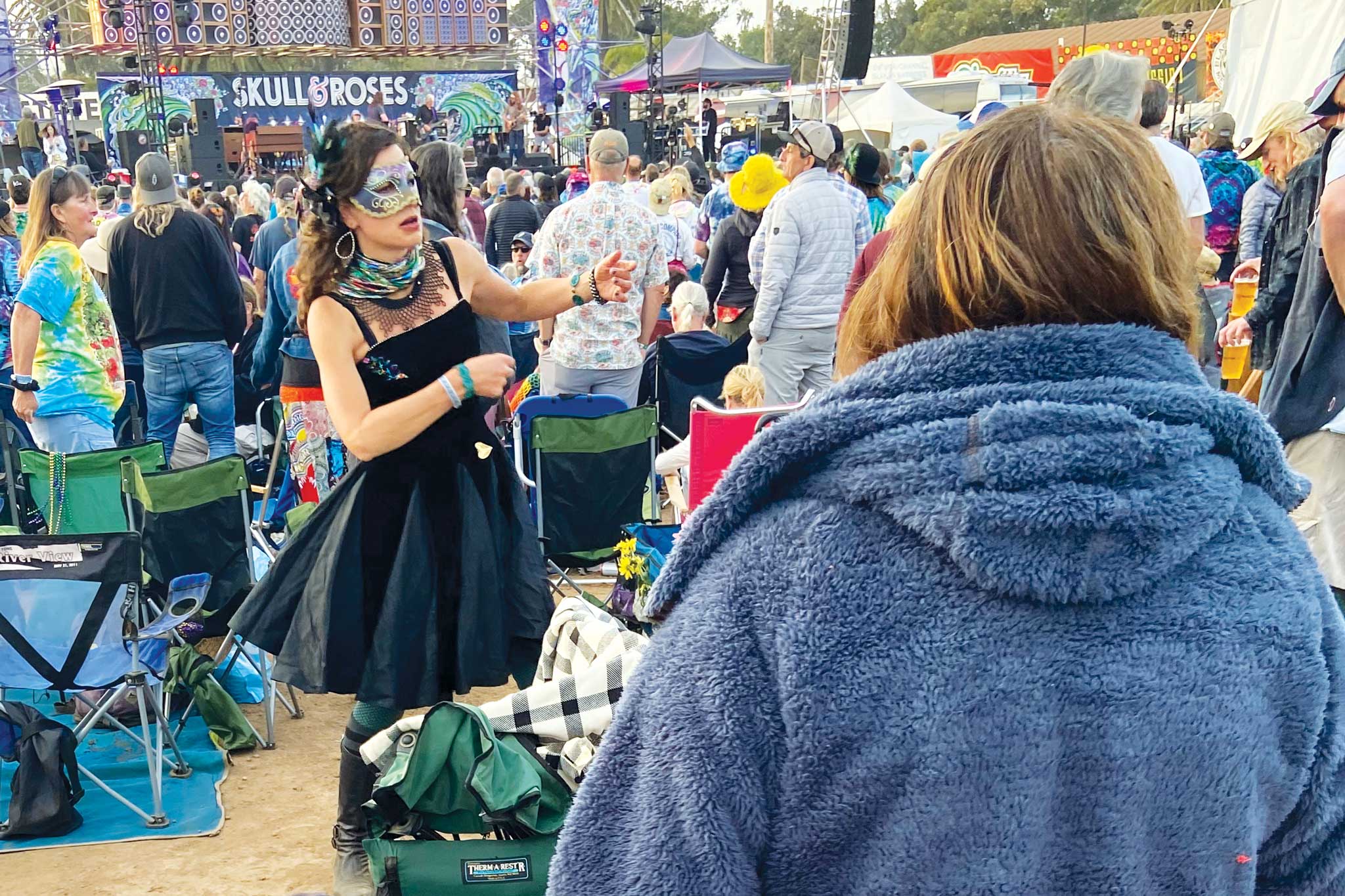 Dance like no one is trying to take your place…

Electric Waste Band rang in the new year with sweet, upbeat sounds from the Grateful Dead. I saw some friends of mine at a table and went to say hello. But shortly after striking up a conversation with them, I felt a tap on my shoulder. I turned around and the guy who patted me said, “You’re standing in my dance space, so you gotta move!”

Now Winstons has a good-sized dance floor; it can accommodate a number of people while still leaving some leeway to get you started. But I wasn’t on the dance floor, and neither was this guy. After giving his command, he returned to his chosen spot, three or four feet away from me – again, not on the dance floor. I had never seen anything like it. I’m the last person to tell someone they can’t dance anywhere they want, especially in a club on New Years Eve. But I was taken aback by how this guy staked out a concession at the where I was. Had he deposited some sort of payment to book it?

Well, sort of. My friend Milo Rose told me that he and the guy had the same exchange, and that he was told that the guy was a big Deadhead, and that he had been to so many Dead concerts that he had right in its place. I tended to agree with Milo’s take on the matter: “I don’t want to step into anyone’s individual space, but when you’re in public, you’re not in you and you are not in your living room.”

The Grateful Dead reunited in 1965 and became the house band for writer Ken Kesey’s Acid Tests. During these tests, you were given a cup of Kool-Aid with LSD added. There would be projectors showing molten amoeba-like images. There were people in costumes, people dancing very close together, people holding each other and, in some cases, having sex. All to the music of the dead. I don’t know if anyone staked a piece of soil like his in these tests. I guess not: something in the scene seems to lean more towards sharing than exclusion, even if I imagine people have made a little room for people having sex.

Most recently, I attended the Skull & Roses Festival in Ventura, which took place April 7-10. The festival featured 31 acts on a rotating stage, playing mostly Grateful Dead music. When I arrived I noticed that people had left their chairs on the arena floor the day before the festival. They had staked out their claims; it was where they would sit, stand and dance. Among them was an old gentleman whom I will call Fart Man. I don’t usually make fun of people, but when he danced, he seemed to push the smell of a fart from his behind. He did this for the first two days of the festival, carving out a nice place for himself in the center of the crowd.

On the third day, I noticed that Fart Man was not in his usual place. Then, as I was standing and talking to friends left of center, I felt a tap on my shoulder. It was Fart Man. He said, “Excuse me, you’re standing in my dance space, and I’ve been there for two days!” Before I could respond with, “Excuse me; I’m going to move,” he raised his voice and shouted, “Get out of my dance space!

I couldn’t let this pass. I said, “I’ve seen you standing in the middle of the square for the past few days, and now you’ve moved here trying to claim a new claim or something. Then I pulled away from him so he could be free to fart away. But it didn’t stop there. The next day, I noticed an older woman pushing another older woman in the front row near the stage, yelling, “This is my dancing place!” I couldn’t imagine this happening at a Slayer concert. Was it a Grateful Dead thing?

I took to social media for a response and got a great response from an individual named David Defoe. “I would say the concept took root in the ballrooms of San Francisco in the mid-60s,” he said. “The participants were not standing voyeurs like packed sardines drooling on their shoes, but integral to the whole experience. They were encouraged to panic freely rather than just being bystanders. Growing up with Deadhead parents, I knew it was common sense that you didn’t rush for dancers; you allowed them to do their job without a hitch. The new trend of stalling in front, only to stand there like a fucking idiot with his cell phone up, is something I will never understand. We are now a nation of spectators rather than a single collection of free monsters.

It didn’t quite explain my own encounters, but at least it gave a possible reason why people became possessive. And his comments made me think that I might be less likely to get a pat on the shoulder if I was dancing myself. Still, I couldn’t help but agree with Milo Rose’s point that you don’t want to step into anyone’s individual space, but being in public means you shouldn’t not act in an authorized manner, as you would in your own home. At concerts and festivals, there’s a good chance you’ll get bumped into, stepped on, and have your personal space encroached on, whether it’s standing or dancing. We all need to be patient and understanding and just get along. I think the dead would agree.