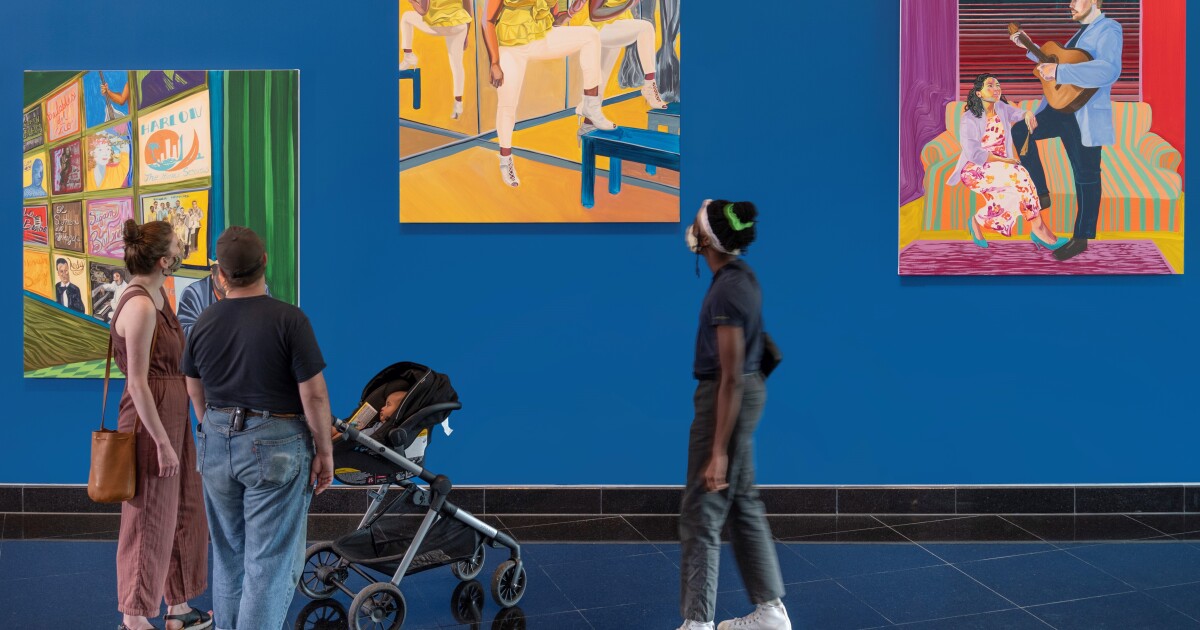 Kansas City’s salsa community dances in the spotlight at the Kemper Museum of Contemporary Art | KCUR 89.3

On the dance floor and against the backdrop of Latin American rhythms of music, a salsa community has sprung up in Kansas City. And that is the subject of the exhibition “Aliza Nisenbaum: Aquí Se Puede (Here You Can)” at the Kemper Museum of Contemporary Art until July 31.

The exhibit features three brightly colored portraits of a DJ, a dance instructor, and a couple with musical ties to Cuba, all painted by Nisenbaum.

“In a way, my painting is about individuals and their faces,” Nisenbaum said at a recent artist talk, “but the formal elements of the work are sort of an elaboration of their stories. “

Nisenbaum worked closely with the Kemper to identify the subjects for his three Kansas City portraits, using Zoom to connect with them.

“This project really embodies the energy and the spirit and the history and the drive and all the wonderful people, you know, involved in the salsa community,” said Erin Dziedzic, director of conservation affairs at Kemper.

Luis Sainz, better known as DJ Luis, is the first portrait Nisenbaum says he started, describing him as “really central” in the salsa dance community.

“It was quite an experience, you know,” he says. “I never thought I would be the subject of a portrait.”

Nisenbaum says she took the title of the show from one of Sainz’s records.

“He showed me all his records,” she explains, “and that’s when we took the title of the show: ‘Aqui Se Puede (Here You Can)’, which simply means a sense of possibility Here, anything is possible.

The pandemic put an end to a long-running salsa party that Sainz hosted at the Chesterfield (inside the now closed Alamo Drafthouse Cinema). He’s been working professionally as a DJ since 2002, and these days he hosts gigs at recordBar and Ship.

“It’s very rhythmic. It’s above all a question of dance,” he says of salsa, which mixes jazz and Latin rhythms. “It’s about learning to communicate with each other, it’s a very beautiful dance and very passionate too.”

Watson, who is African American, grew up dancing to R&B and hip hop. But soon after moving to Kansas City in 2006, a friend took her to a Latin party, and she was “pretty much hooked ever since.”

For the past decade she has taught classes at Viva Social Dance Studio in Shawnee, Kansas.

“And I was thinking (at this time) where you’re about to start dancing,” Nisenbaum says of Watson’s portrait. “A kind of measurement of the time when you start using your fingers, (you are) about to start engaging in dance activity.”

The third portrait shows Michael McClintock, a classically trained guitarist, and Dálida Pupo. The couple met in Cuba in 2013 and now run a cultural project in Kansas City called Cubanisms.

“I wanted something that will keep me connected to Cuba in some way because I love my country and our culture,” says Pupo. “And we also wanted to do something together.”

McClintock and Pupo spent several Zoom sessions with Nisenbaum, providing a virtual tour of their home, his artwork, and McClintock’s instrument, the tres Cubano.

“They were telling me about a song he had written for her, while he was waiting for her to join him in the United States,” Nisenbaum recalled. “The name of the song is ‘Waiting for You.’ I was thinking of doing a painting that was basically a serenade in some ways.

When they first saw the painting on the museum’s atrium wall, McClintock and Pupo said it was a little larger than expected – and they view it with a sense of responsibility.

According to Pupo, there is “a bit more pressure to do things better, to try to work harder, to try to represent the Latin community in one way or another and the whole dance and music community. “.

McClintock adds, “It kind of made me want to up my game when it comes to being part of this community.”

“Alisa Nisenbaum: Aquí Se Puede (Here You Can)” is on view through July 31 in the atrium of the Kemper Museum of Contemporary Art, 4420 Warwick Blvd., Kansas City, Missouri.