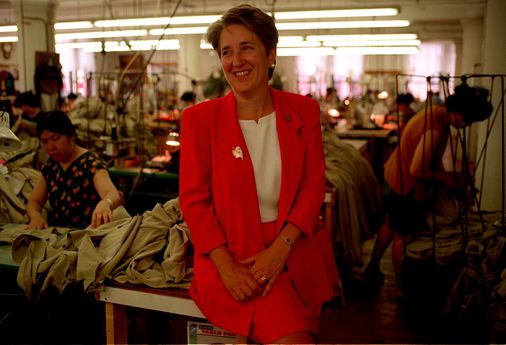 Having risen to powerful union office nearly 25 years ago, Ms. Casavant wanted to ensure that other women and people of color would follow her into leadership roles.

One of her priorities was to work with and serve on the board of the nonprofit Women’s Institute for Leadership Development to find and encourage women who had the potential to become public servants. .

A look at the news and events that shape the day, delivered a few times a week with a side of humor and a dash of attitude.

“We can’t just appoint people to power, because they have to be elected,” she noted in the Globe interview. “But we can help prepare them for leadership and we can send the message that this particular person has talent and ability and should be heard and given a chance.”

After stepping down as secretary-treasurer of the AFL-CIO in 2006, Ms. Casavant served as the executive director of the Women’s Institute for Leadership Development, which goes by the acronym WILD.

“Kathy brought a deep knowledge and experience of the Mass labor movement, which benefited WILD immensely,” the organization said in a tribute on its website, hailing her as “the only woman” to have held the position of AFL-CIO Secretary of State. – post of treasurer.

“But more than that, her passion for supporting and promoting women’s activism and leadership has made her beloved by all who have entered WILD’s orbit,” the organization said. “She was a leader, but also a teacher, a mentor, a friend. She will forever remain in our hearts. »

Born July 27, 1951 in Taunton, Kathleen Morin was the eldest of four children and the only daughter of school bus driver May Brown Morin and Arthur Morin.

In the 1998 interview, Ms Casavant said her father, who painted machines in factories, was an alcoholic whose behavior created a “rather dysfunctional” family.

“She was really raised by her mother, who died three years ago,” said Ms Casavant’s son, Brant from Medford. “His mother was a really stern figure. She was extremely pragmatic and had a very sharp tongue and quick wit.

As Ms Casavant grew up in Raynham, her mother discouraged her aspirations to pursue higher education. “Forget it,” she said whenever young Kathy broached the subject.

Although several years later she earned a bachelor’s degree in labor relations from the University of Massachusetts Boston, at age 13 she began working as a hat check girl at the Roseland Ballroom in Taunton, where her mother was. formerly a waitress.

“I learned ballroom dancing there because the older men always asked me to dance,” Ms. Casavant said.

Leaving home at 18, she moved to Newport, RI, and worked as a secretary at Raytheon Co. in Portsmouth, 10 miles away.

While in Newport, she met Arnold Casavant, who had just completed his naval service and was to work as a teacher for many years. The couple married in 1972.

“They met by chance. He liked her and asked her out,” their son said. “She stood him up on their first date, but he persisted.”

Ms Casavant left Raytheon for a secretarial job in Fall River, where she said she worked ‘for some eccentric guy who paid me an executive secretary’s salary to pick up his kids in his Rolls-Royce and do the laundry . Of course, I didn’t stay there long.

She was 27 when she took a job as an accountant and clerk with the Amalgamated Apparel and Textile Workers Union in southeastern Massachusetts.

Fascinated by the stories organizers told of recruiting potential union members and distributing leaflets, she quickly broadened her interests and involvement.

She became a senior official representing unionized textile workers throughout the region, and became known for her prowess in negotiating contracts for immigrants in the labor market.

Even as a public servant at the bargaining tables, Ms. Casavant insisted on joining the picket lines as well, collecting signatures and lending her voice to the protests.

Beneath her tailoring and professional demeanor was an inspirational speaker, Celia Wcislo, a longtime Service Employees International Union official, told The Globe in 1998.

Ms Casavant “literally drove the crowd crazy” by speaking out at an anti-sweatshop protest, Wcislo said. “She’s a great agitator. Put her in front of a microphone, and she’s not at all what she seems.

In the mid-1990s, when the Amalgamated Clothing and Textile Workers Union merged with a garment workers’ union, Ms. Casavant retained her title as Secretary-Treasurer of the New England Chapter of the ACTWU with the chapter of New England of the new Union of Needletrades, Industrial, and Textile Employees, or UNITE. (This union and the Hotel and Restaurant Employees Union later formed UNITE HERE.)

She campaigned to raise the minimum wage and advocated on behalf of women of color who were abused in textile industry jobs.

“Some of the workers complained about being timed when going to the bathroom,” Ms. Casavant said, “and there was a situation where some were taking work home and getting very little pay.”

In 2006, shortly after stepping down as Massachusetts AFL-CIO Secretary-Treasurer, she was appointed to a leadership position with the National AFL-CIO Unity Partnership Team.

Among his duties was encouraging teachers to join unions in states from Maine to Wyoming, and she and her husband moved for a time from Massachusetts to Washington, DC.

“They were inseparable,” their son said of his parents, and that bond continued well into Ms Casavant’s final months with Alzheimer’s, when Arnie Casavant was her primary carer.

In the days following Ms Casavant’s death, Brant said, dozens of people have reached out, “and they’re all talking about her as a mentor, incredible kindness and incredible passion. for the trade union movement and the role of women in work and the workplace.”

Besides her husband and son, Ms. Casavant is survived by two brothers, Robert of Colorado and Richard of California.

Family and friends will gather to celebrate the life of Ms. Casavant at 5 p.m. on June 5 at IBEW Local 103 in Dorchester.

Prior to becoming secretary-treasurer of the state AFL-CIO, Ms. Casavant was the first woman to serve as the organization’s executive vice president.

She was acutely aware of what her revolutionary status would mean for the women who would follow.

“Ten years ago it was not possible to get into this kind of position,” Ms. Casavant told the Globe in 1997. “Now women are starting to see that there is hope. We now represent nearly 40 percent of all unionized workers in this country and the numbers are growing.

Bryan Marquard can be reached at [email protected]