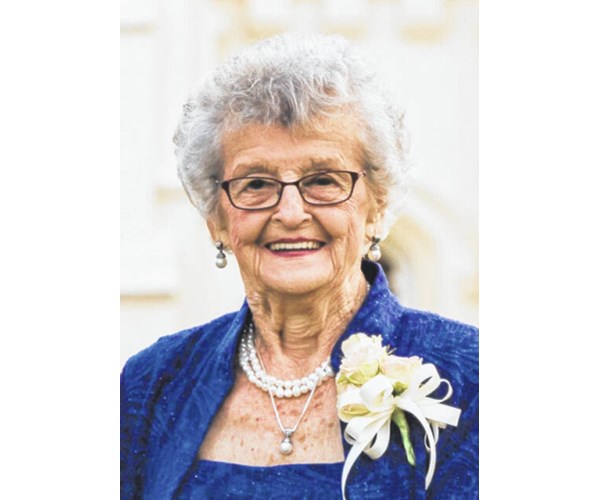 YELLOW SPRINGS — Mary Elizabeth (Hawkins) Struewing, 95, of Yellow Springs, Ohio, passed away peacefully with her children by her side on Thursday, March 3, 2022. Mary was born May 8, 1926 to Charles Kenneth and Martha M. Johnson Hawkins on the Hawkins Homestead at the corner of Hawkins Road and Fairground Road in Xenia Township, Greene County. A year later, his parents bought a farm not far away on Trebein Road in Beavercreek. Mary’s father was a farmer and her mother was a skilled homemaker, cook and gardener. The eldest of four children, Mary helped her father every day, milking the cows and chopping wood, always talking while they worked. When Mary started first grade, she took the bus every day to the brand new main school in Beavercreek. She played intramural basketball in grades seven and eight and took classes at the Dayton Art Institute. The summer of her freshman year, Mary met Bill Struewing at a wartime ball at Alford Auditorium in Cedarville. She remembers first noticing Bill at a basketball game, throwing popcorn at him for fun. Mary graduated from Beavercreek High School in 1944. She began working as a fashion buyer at Elder’s in downtown Dayton, choosing inventory and helping customers put together outfits. Bill was walking up and down the escalator in the store, waiting for her to leave work so he could take her home. He proposed on Valentine’s Day, and they were married on May 16, 1945, at St. Paul’s Catholic Church in Yellow Springs. Mary, 19, wore a light woolen suit and “paper shoes”, due to wartime rationing of materials. After their marriage, Bill enlisted in the army and he and Mary moved to Fort Knox, Kentucky. When Bill was transferred to Fort Kilmer in New Jersey, Mary quickly followed with their six-week-old baby, Kathy. They returned to Ohio after the war and lived in an apartment in Xenia, where they had their second daughter, Frances. Bill and Mary bought land on the edge of Yellow Springs in 1947, where they built a garage to live in while they built their first home. They happily welcomed four more children, Ken, John, Cindy and Mike, whom they raised in the village. Mary was Bill’s partner as he built custom homes in Yellow Springs. She did whatever was necessary for her construction business – picking up supplies, keeping the books and payroll, often taking her two youngest children to job sites. When Bill needed her, Mary was there. They were married for 67 years, until her death in 2012. Mary did some great things. She baked fabulous cakes, winning countless blue ribbons at county fairs. She used the prize money to buy her first KitchenAid mixer. Mary sewed the most fashionable clothes, for herself and for her young children. They had a new Easter outfit every year, and she always liked to wear a new dress. Mary has grown the most beautiful flowers. She could be found in her cascading gardens, devotedly tending to her beloved flowers with the nurturing and precise hand they needed. With a keen eye and a flick of her wrist, she could place a stem just right, earning home numerous “Best of Show” titles in flower arranging at garden club competitions. Marie had a great joy of living. She liked to listen to music and dance. She enjoyed playing bridge and golfing with friends. (She was competitive!) She loved traveling and spending winters in Florida with Bill — watching seabirds dive, collecting rose-hued seashells. She loved to cheer on her favorite sports teams, faithfully following the Cincinnati Reds on radio and television. She enjoyed sharing her talents in her community, belonging to the Lioness Club, the Yellow Springs Library Association and the Friendly Gardeners Club for over 50 years. Mary was beautiful. She always had the sharpest outfit in the room, from her jewelry to her shoes. She also had a quick wit and people loved talking to her. Mary was fun and she loved being in the middle of the party. She was always ready for a party, as long as she had her family there to share her laughter. Mary loved her six children dearly and loved the large family they had given her. She loved being the “grandmother” to 25 grandchildren and 51 great-grandchildren, quick to recite that ever-changing number. She said proudly, “And I love every one of them.” Mary’s family will remember her as a wonderful grandmother, mother and wife; a lover of flowers and life. Mary is survived by five children, Kathy (Tom) Holcombe, Fran (Mike) DeWine, Ken (Betheen) Struewing, John (Kathy) Struewing, Cynthia (Chris) Mucher and one stepdaughter, Sallie Struewing. She is also survived by her sister, JoAnne (Russell) Crouse; two sisters-in-law, Dewanda Hawkins and Joan Rose, and a brother-in-law, Paul Struewing. Mary is preceded in death by her parents; her husband, William Joseph Struewing; one son, Michael Struewing; one granddaughter, Becky DeWine; one great-granddaughter, Kathryn Becky DeWine; one sister, Barbara (Ralph) Mallow; a brother, Charles Edward Hawkins, and a sister-in-law, Barbara Hawkins. Visitation will be held from 5 to 7 p.m. Friday, March 11 at Neeld Funeral Home, 1276 N. Detroit St., Xenia. A Christian burial mass will be held at 10 a.m. on Saturday, March 12 at St. Paul’s Catholic Church, 308 Phillips St., Yellow Springs. Interment will follow at St. Paul’s Catholic Cemetery. In lieu of flowers, the family requests that contributions be made to Becky DeWine School, Hands Together, PO Box 80985, Springfield, MA 01138; Friends Care Community, 150 E. Herman St., Yellow Springs, OH 45387, or Ohio’s Dayton Hospice, 324 Wilmington Ave., Dayton, OH 45420. Mary’s children thank Friends Care and Ohio’s Hospice for their invaluable support for Mary and her family. Condolences may be presented to the family at www.NeeldFuneralHome.com.

Published by Greene County Dailies from March 8 to March 9, 2022.