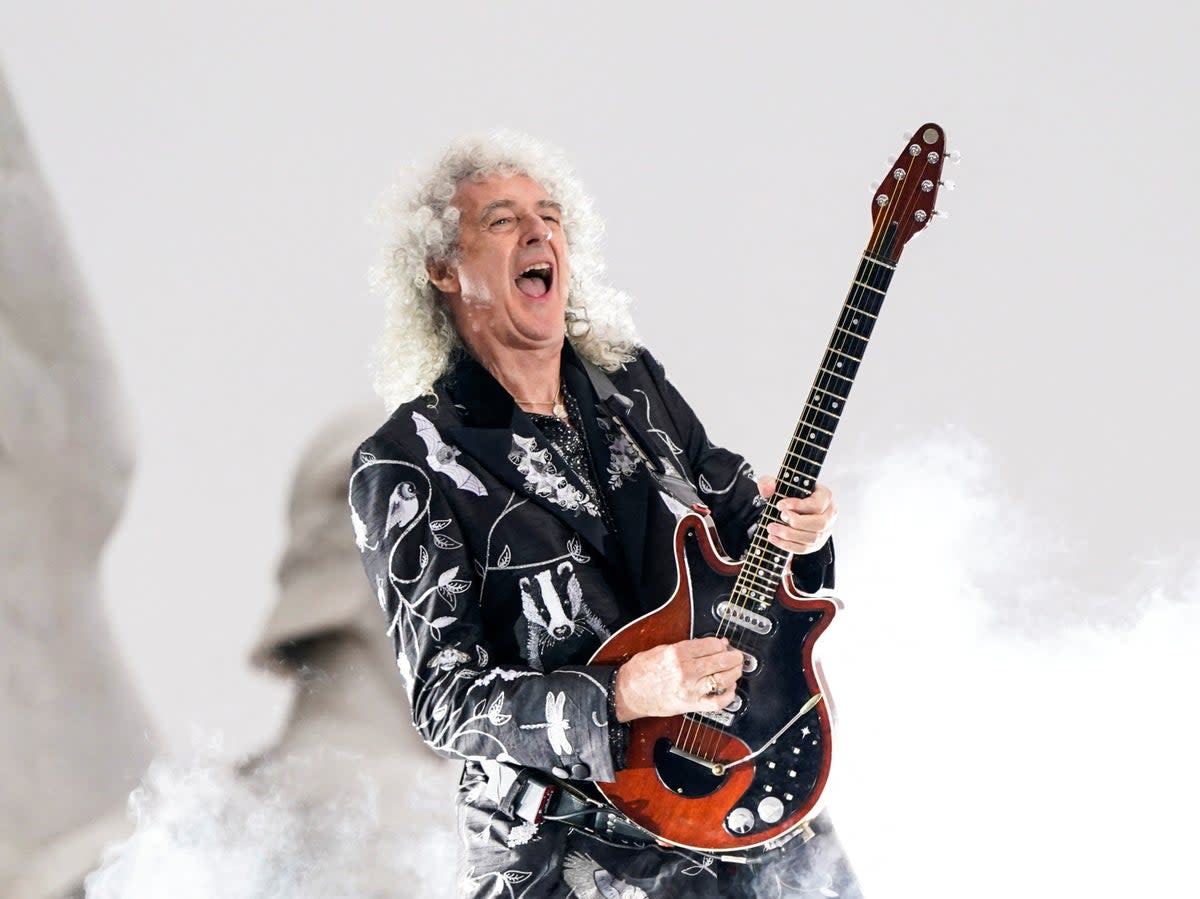 One of the weirdest random amusement barrages ever

What is it up there in the sky? Is it a bird? Is it a badger? No, it’s Brian May, rising from the top of a stage built around the Queen Victoria Memorial. He plays the solo to “We Will Rock You”, accompanied by a legion of Royal Guard drummers, all hammering the rhythm of handclaps and mustaches at Freddie Mercury with their drumsticks. As the old script says, when Brian May rises above Buckingham Palace, let the work begin.

After an afternoon spent gobbling Majtinis with the same people who will be stealing their wheelie bins next week, thousands of flag bearers flock to the Mall for a live concert of music, dance and unfathomable weirdness. It’s to celebrate 70 years of involuntary servitude to a woman at the head of a family accustomed to using our money to buy herself legal trouble. Huzah! Thanks ma’am! party door, what partygate?

As the show begins with a moving skit of the Queen having tea with Paddington Bear, one would expect a fairly safe, comfortable and nonagenarian-friendly sort of night out – George Ezra, Elton, Rod, Diana Ross. The Kunts are presumably applauded in the tower for the duration. But what we, and an increasingly stunned stand of royals, get is one of the most bizarre and relentless barrages of random entertainment ever.

For two and a half hours, three stages set up in front of the palace gates sing out numbers without stopping. Each performer is up to 130% and crams all of their most soulful showstoppers into their precious few minutes on stage. Whoever programmed the bill must have done so on heavy stimulants; it’s like they’re ripping names off their cast list and throwing them into the program in a frenzy, intent on creating a spectacle that resembles the opening and closing ceremonies of the 2012 Olympics played simultaneously.

The effect is like rolling into a ball on the floor while being brutally beaten by 70 years of cultivation all at once. Blink during Elbow’s ‘One Day Like This’ anthem and all of a sudden Diversity weaves its way through the entirety of British pop history, from Abbey Road to Stormzy in four minutes. Pull out a much-needed Nurofen during comedian Doc Brown’s catchy rap about British sport and the moment you’ve swallowed it, Andrea Bocelli does ‘Nessun Dorma’.

It’s hard to choose the most shocking cultural juxtaposition of the night. Top of the list has to be Mimi Webb’s 80s pop ode to romantic arson, ‘House on Fire’, which gives way to Andrew Lloyd Webber’s interview hamiltonby Lin-Manuel Miranda, in song, on the piano. And that’s just the introduction to a quick showcase of five different musicals that feels like the Royal Variety Show on meth, jumping between “Circle of Life,” “The Phantom of the Opera,” six R&B brides* **-kicking of Henry VIII and Jason Donovan cross “Any Dream Will Do”. No wonder the Queen herself kicked off the concert; she probably saw rehearsals from a window and realized her blood pressure wouldn’t take it.

Things get a little less breathless when the bigger bands have some room to run around, but even then they tend to shoot 10-minute megamixes of their most explosive moments. Adam Lambert, dressed as a sultan on a tanning bed, gives Queen the TV show thrill they never really needed as ‘Don’t Stop Me Now’ quickly turns into ‘We Are the Champions’ . From a purple boudoir, producer Jax Jones presides over a carnival of Latin pop, rap and R&B, introducing guests Stefflon Don, Mabel and John Newman as if he were hosting a quick refresher course on TikTok pop. Duran Duran goes through a funk-filled “Notorious” with Nile Rodgers, then hosts a sci-fi parade for “Girls on Film” as the entire facade of the palace becomes a gigantic screen doing treacherous things with the colors of the flag.

The most successful acts take their sweet time. Take Alicia Keys, singing passionate soul-pop like ‘Girl on Fire’ and ‘Empire State of Mind (Part II) Broken Down’ stood at her piano in a royal black cape as if trying to skip the line to the throne . Celeste singing “What a Wonderful World” like a storm in the sky to Hans Zimmer’s beautiful orchestral accompaniment. (Meanwhile, visuals transform the palace into a CGI garden as part of a moving eco-friendly section involving the Royal Ballet and a speech by Prince William.) Prince Charles – presented by Stephen Fry, making more toad than Lord Melchett – paying the most touching tribute of the night to his mother, only to find he’s the warm-up act for Sigala and Ella Eyre, who are splashing phallic love rockets across the palace front and launch a gigantic corgi drone into the night sky.

By the end, the bombast just starts to bombard. A performance of The sound of music“Climb Ev’ry Mountain” by featuring Mica Paris and Nicola Roberts gets painfully over the top, and headliner Diana Ross has none of it. She lip-syncs – badly, but softly – through “Chain Reaction” and “Ain’t No Mountain High Enough”, speaks on her own vocal track and yet charms us all just by being so happy to be here. A bizarre ending to a dizzying event that perhaps, subconsciously, acts as an ultra-meta commentary on the madness of the monarchy itself. Because frankly, if the aliens had landed during those bizarre two and a half hours of flattering submission and crazy pop surrealism, they’d consider us unsalvageable.