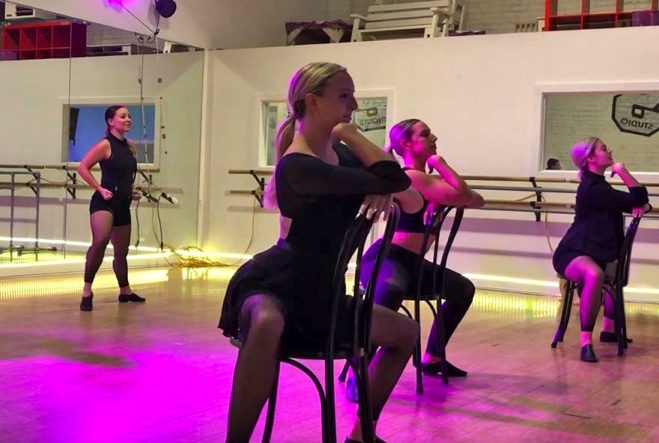 The Outlet Dance Company returns to the stage to present its seventh annual dance concert featuring a wide variety of dance styles including contemporary, jazz, ballet and musical theater. Thirty dancers will take the audience on a roller coaster of passion, comedy, daring and drama.

While the branches rehearse separately, they all come together for a collaborative performance at the end of the season.

Under the direction of Katrina Rathbone and Leslie Spear, this show will feature new choreography from the artistic directors and members of the company, including a few numbers from their performance canceled in 2020.

Outlet Dance Company shares the stage this year with young dancers from Ignite Dance Company (Pavilion Dance Center-Elk Grove Village) as part of its annual outreach program. The program gives young dancers the opportunity to perform in a professional setting, as well as to expand their network with experienced dancers.

After a year of isolation and cancellations, these dancers are excited to share everything they’ve worked on with the audience.

After graduation, she choreographed as a member of RDT for its annual concerts and community outreach concerts which she also conducted and staged. In 2012, her choreography “Cluttered” was performed by RDT in the Dance Chicago 2012 show. When she is not running Outlet, she works as an in-house creative director and graphic designer and photographer.

Spear, artistic director, started dancing at the age of four with the Pavilion Dance Center and continued with the Elk Grove High School Orchesis program. A graduate of Purdue University, she spent four years with the Purdue Repertory Dance Company. She graduated in French education with minors in Spanish and dance. After graduating from college, she worked as a dancer and choreographer for the Rodriguez Dance Theater. In 2008 she started teaching at Huntley High School where she founded the Orchesis program and started a dance program. She received a Master of Arts in Dance Education from the University of North Carolina-Greensboro and continues to inspire young dancers in Tampa, Florida.

The members of the Nord society include:

Abby Zielinski is an environmental engineer who works on parks and recreation projects and enjoys cooking in her spare time. His interests are in ballet and jazz. She joined the Purdue Contemporary Dance Company to learn about modern dance.

Allison Hornung received her Bachelor of Science in Dance Education and Physical Education Approval from Illinois State University. While in college, she was a four-year member of the Illinois State Dance Theater, Dance Assn. and began his choreographic career at Bloomington High School choreographing their musicals. She teaches at Loyola Academy and runs one of their two dance companies.

Ally Valadez is a full-time dance teacher and conductor at Regina Dominican High School in Wilmette.

Andrea Novak, of Arlington Heights, was for six years a member of the children’s cast of The Nutcracker with the Joffrey Ballet of Chicago. She majored in Marketing and obtained minors in Dance and Public Relations at the University of Wisconsin-Whitewater. During her university studies, she was a member of the UWW Dance Company and UWW for four years. She obtained her Master of Science in Communication and now works as a Brand and Marketing Manager for RP Group International.

Ashley Newton danced at the Picture Us Different Dance Studio in Park Ridge. At the University of Illinois at Urbana-Champaign, she earned her BA in Advertising and danced with the Legend Dance Company. For 12 years, she worked for a civil engineering company as Senior Marketing Coordinator. She has been a member of Outlet Dance North for seven years and a member of the Board of Directors.

Becca Bremer has performed in Orchesis and Poms at Maine West High School and in two dance companies at the Battle Academy of the Dance. She graduated from Hope College with a Bachelor of Arts in Dance and Choreography. She danced with the Strike Time Dance Company and various faculty showcases and performed and choreographed in Paris. Bremer teaches at the River Trails Park District.

Brooke Kirschsieper graduated with a BA in Dance Performance and Writing. She has been a dance teacher at Dance Workshop and Dance Images. She worked for four years at Orangetheory Fitness and is now an admissions counselor at Rasmussen University.

Cassie Olson has been a six-year member of North and South, as well as a member of the Board of Directors. At the age of 3, she began her competitive dancing career with the Starlite Dance Company and continued to compete for 10 years. At Elk Grove High School, she was a member of the Grenadette Poms team. She graduated from the University of Illinois at Urbana-Champaign with a bachelor’s degree in chemistry and is now a certified pharmacy technician.

Danielle Rivard was invited to join a pre-professional dance company called Ballet North at the age of five. She studied ballet and performed in productions of Swan Lake, Sleeping Beauty, Don Quixote and others. She learned various dance styles in high school and the college dance club. She obtained her master’s degree in nursing and hopes to work in a pediatric unit.

Jackie Higgason danced and participated in gymnastics competitions in middle school and high school. She is now dancing in her fourth year with the Outlet Dance Company.

Kelly Hume-Geremia was born and raised in Arlington Heights. She received her dance education degree from Illinois State University and her dance degree from Ohio University. She is a founding member of Outlet Dance Company. For the past three years, she has taught at the Gurnee Park District and choreographed for their competitive team, Above the Barre. She taught in Chicago public schools for six years. She has taught, choreographed and judged high school Orchesis groups in the Chicagoland area.

Meg Heller has studied ballet, tap, jazz, hip hop, modern, funk, acrodance, belly dance, and lyrical dance for the past 13 years. She continued her training as a dancer and rehearsal director in the Elk Grove High School Orchesis program. She graduated from Hope College in 2017 with a BA in Business Management.

Melissa Winters has performed and competed with Ambition Dance Company for eight years. She graduated from Illinois State University with a major in elementary education and a minor in dance. While at ISU, she performed with the Illinois State Dance Theater and the Dance Assn. She teaches second year at Lake Louise Elementary in the Palatine and works in the Streamwood Park District as a choreographer and co-director of the Starlights Dance Company.

Meredith Star received dance training at the Pavilion Dance Center and Elk Grove High School Orchesis, Jagged Edge Dance Company and Dorothy’s Dancing Unlimited while in high school. She is a registered dietitian at the Center for Discovery. She has been a choreographer for Elk Grove Orchesis, RDT’s Community Dance Project and the Woodlawn Dance Academy. She has been a member of the board of directors and a member of the company for seven years.

Rachel Lore trained in ballet, tap dance, jazz, hip hop and contemporary dance. She graduated with a BS in Psychology from Loyola University in Chicago, where she was part of The Dance Company. She received her Masters in School Guidance at Loyola and is now a college counselor and dance teacher at the Pavilion Dance Center.

Samantha Scaccianoce has been a full member of Outlet Dance Company North for four years. She has been training in all styles of dance for over 20 years. She graduated with a BFA in Dance Performance from Northern Illinois University. She trained with River North Dance Chicago, DanceWorks Chicago and Eisenhower Dance Ensemble.

Stacy Mowers received a BFA in Dance from Northern Illinois University, dancing with the Northern Dance Theater. She has been a member of the North and the South for seven years. When not dancing, she supports professional development for nurses and guidance for Northwestern Medicine as a nurse educator.

Susie Rusch has been a six-year member of Outlet Dance Company North. During her childhood, she trained in a variety of dance styles, but mainly in ballet. She was a member and director of the Orchesis Dance Company at Maine South High School. She received a BA in Psychology and Law / Society with a minor in Forensic Science from Purdue University. At Purdue, she was a member of two dance groups.

Taylor Kanara has been a five-year member of Outlet Dance Company North. For 13 years she danced at the Pavilion Dance Center. She was a member of the Orchesis of Elk Grove High School. She has performed in annual shows, as well as the Dist. 214 Illinois State Dance Festival and Showcases. She graduated from Wartburg College in Waverly, IA with a double major in Psychology and Sociology and a minor in Spanish. She participated in the dance team at Wartburg College. She now works for the Children’s Advocacy Center in Hoffman Estates.

Support local news by subscribing to Journal & Topics in print or online.

Devon Allen on the track tonight, sport climbing medals – and how to watch the men’s basketball semi-finals at the Tokyo Olympics – NBC New York