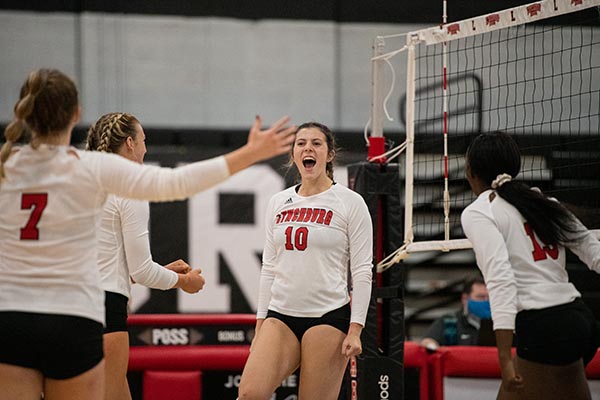 “They made a comment in practice that they’re going to miss my dance and my happiness,” said Walton, a criminology student from Pamplin, Virginia. “I have always been described as an outgoing person. We play music during practice, so I… you know.

Walton’s teammate Abbi Leeper ’23 was there, dancing alongside her best friend for the past three years.

“We’ve been best friends since freshman year,” said Leeper, a statistics and data scientist from Midlothian, Va. “We hit it off immediately and bonded at the hip. We were always the “hype men” in the locker room and dancing, getting ready for games.

“What I love the most about Josey is her love for her loved ones. I know I could talk to her about anything and she would be there for me no matter the situation. Josey is my twin flame and I swear we are the same person.

“I’m so lucky to know her. I am sad, but also immensely proud to see her graduate from Lynchburg University.

Walton initially majored in exercise physiology, but said she eventually “realized it wasn’t really for me.” After her roommate suggested she look into criminology, she spoke with Dr. Daniel Murphy, the program’s assistant professor. He encouraged her to take a criminology course – Child Abuse and Exploitation – her second year.

“[The class] hit something inside me and I said, ‘This is what I want to do,'” she said. “I became interested in child protective services and child abuse investigation, and thought social work would be the best option for me.”

She also spoke with Dr. Sharon Foreman, Associate Professor of Sociology and Chair of the Department of Sociology and Human Services. “[She] is the human services guru,” Walton said. “I participated in many of his classes. I enjoyed all of his classes and it struck my passion for social work. Since then I have been on this path.

Hannah Givens, Lynchburg’s head volleyball coach, describes Walton – a 5ft 9in outside hitter – as an “incredible” person brimming with “strength and grace”.

She added: “What makes Josey so amazing is that every time she walks into a room she smiles and is happy to be there no matter what’s going on backstage with her and his family.”

Walton, the only daughter in a tight-knit family of four, has cystic fibrosis, a genetic condition that primarily affects the lungs, but can also affect the digestive system and other organs. His younger brother, Ethan, also has CF. Additionally, her father has Lou Gehrig’s disease, also known as amyotrophic lateral sclerosis or ALS.

Walton described his family as “very close”. She and her father share an affinity for horror movies, and this past summer the family road went through Colorado, Utah and Arizona.

“We do a lot of things in my family,” she said. “I would say that my family are among my best friends. I have a fairly large extended family. We all live in the same neighborhood. We can take quads to see each other, and we do. We see each other a lot. »

Walton’s father was diagnosed with ALS when she was a senior in high school. It was an adjustment for everyone. “We had to adapt a lot to my father’s ALS,” she says. “He’s always been a very active, very athletic person, and he does everything with us. It just goes and goes and goes.

Having cystic fibrosis, Walton said she and her brother can relate to much of what he’s going through and help him. “Mom handled it really well, but it was good that she helped us out,” Walton said. “We do a lot to help.

“Mostly, I would say me and my brother, being there for her has been one of the biggest helps, and being there for my dad. … Because [we] felt some of the same things: we feel like outcasts, we take pills, we take treatments and medicine with us when we travel.

“There have been many ‘pluses’ throughout our lives. Somehow helping Dad deal with that helped too.

Despite all the challenges, Walton persevered and thrived. She will graduate in May, a year ahead of schedule. Her future plans include a summer internship with Buckingham County Social Services and a Masters in Social Work.

“His family has really been through the ringer for the past few years,” Givens said. “When I first met Josey, I was amazed to learn that she has CF and the everyday things she needs to be aware of. … Thanks to this disease, she was still able to train as an NCAA athlete, doing weightlifting and working out every day.

“She was really able to use her abilities on the pitch last fall, where she was playing regularly and was a spark plug for her team. Her game really improved for her last year.

Suni Lee’s year through the eyes of her support system