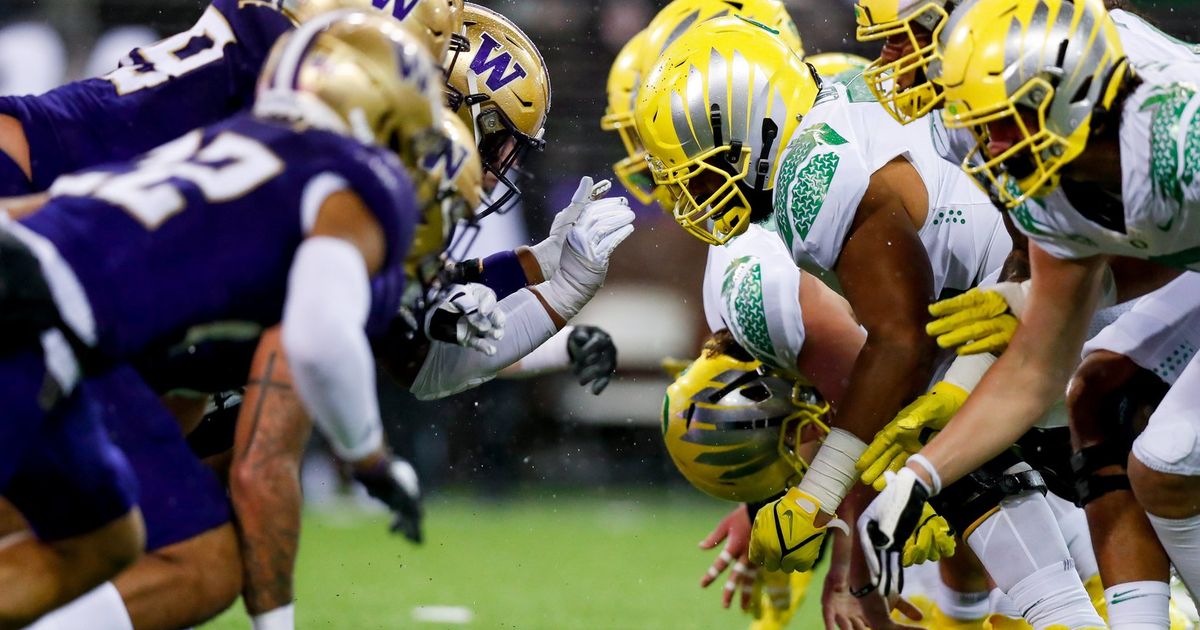 Pac-12 thoughts: Tricky timing for UW and Oregon, UCLA wormhole, options for No. 12 and more

Five not-so-random thoughts on the Pac-12…

1. UCLA’s messy situation could get worse

With California Governor Gavin Newsom and University of California regents demanding a review of UCLA’s double-secret move to the Big Ten, we see exactly why the Bruins went for the stealth approach in the first place.

Had they taken a more public route out of the Pac-12 and left Cal behind, the move would certainly have been blocked or bureaucratically delayed.

It doesn’t look like the UC Regents can stop the Bruins from joining the Big Ten in 2024. But if they want to, they could try to make the process extremely difficult by hitting UCLA where it hurts the most. wrong: in the wallet.

Multiple sources believe the Regents will consider forcing the Bruins to subsidize Cal’s athletic department, which stands to lose millions each year in Pac-12 distributions due to the loss of the Los Angeles market.

Details of a power move by the Regents are unanswered at this point, including how the money would be redirected.

We’re not sure they can touch Big Ten revenues; instead, they might have to collect state stipends from UCLA.

Either way, a loss of revenue for UCLA’s athletic department could have significant repercussions.

Why? Because the Bruins are already in debt. Huge debt. Colossal debt.

Before COVID, they were facing a multi-year shortfall of about $40 million. According to the LA Times, the bill rose to $100 million.

It’s not the desire to spend weekends in Iowa City, which is why the Bruins are leaving their longtime home for a conference 2,000 miles away.

The massive windfall of joining the Big Ten will eventually allow them to climb in the dark.

Chancellor Gene Block only cares about the UCLA athletic department insofar as he doesn’t have to pay for it. He saw the Big Ten movement as a debt exit card and used it.

But if the Bruins are forced to divert a large sum each year to Cal, they won’t have the resources to support their programs, including football, at the level required to thrive in the Big Ten.

The last thing the Bruins want is to start their new existence without being able to reinvest.

Just ask Maryland and Rutgers how it is.

To justify this decision, the Bruins must win – and win early – in the sports they have traditionally dominated.

The UC Regents could make this much more difficult.

We’re not confident the Regents will follow through on the financial penalties and we don’t expect the Bruins to change their minds.

But both situations are worth watching, as is the level of buyer’s remorse that may surface over the next 24 months.

The Hotline made its position on the expansion clear earlier this week. If the Pac-12 decides to replace the Los Angeles schools, San Diego State is the obvious choice.

The Aztecs provide a foothold in the league’s most important recruiting region. They’re opening a new stadium, they can compete at the Pac-12 level in football and basketball, and they’re bringing in a top-30 media market.
But an additional factor should be mentioned: the need for the Pac-12 to use SDSU as a defensive play.

If the conference passes on the Aztecs, they would become available for a potentially aggressive Big 12.

Admittedly, this is not a likely outcome. But nothing can be ruled out as conferences make membership decisions based on financial and competitive positioning for the new era of college football.

By 2024, the Big Ten will own the Los Angeles Basin and all the riches that come with it.

If the Pac-12 stays intact and grows, an even number of teams would need to be added. Besides San Diego State, which schools make sense? A short summary :

– Fresno State has a competitive football program but is just outside the Sacramento-Stockton-Modesto media market, which is No. 20 in the nation (larger than Portland, San Diego and Salt Lake City). According to the valuation assigned to FSU by media companies, the Bulldogs are worth considering.

— SMU would allow the Pac-12 to gain a presence in the Dallas market. The school is No. 68 in the US News and World Report rankings and would no doubt welcome an invite, having been passed over by the Big 12 (which already has TCU in Fort Worth).

— And until the Pac-12 tries to rob schools currently in the Big 12 (or planning to join the conference), we won’t discount the potential for aggressive action from Commissioner George Kliavkoff. In that case, Houston and TCU could be at the top of the wish list.

How this plays out, we can’t begin to guess. But the Hotline’s goal, here and always, is to examine all scenarios so that readers aren’t surprised by any results.

If there is a non-zero chance, we aim to fix it.

4. Tricky timing for Oregon and Washington

In an ideal world, the Pacific Northwest powers would do absolutely nothing for the next two years.

They would stay exactly where they are, with no long-term contract tying them to the Pac-12 or the Big 12.

Why? Because free agency is the place until the Big Ten and Notre Dame finish their long, slow dance.

Notre Dame’s contract with NBC expires at the end of the 2025 season, paving the way for the Irish to join the Big Ten for 26 – the first year of the expanded college football playoffs.

Washington and Oregon would be good candidates, as would Stanford (due to the Bay Area’s academic reputation and media market).

Part of the challenge for Kliavkoff as he tries to hold the conference together is crafting a deal that serves two masters:

– Flexible enough to satisfy Pac-12 schools with an eye on the Big Ten.

Because it has properties the Big Ten might want while the Big 12 no longer has anything of value to either super-league, the Pac-12 is apparently less stable than its Southern Plains neighbor.

One final dynamic worth noting as college football rocks and rolls is the lack of experience at the top of all but one Power Five conference.

We’re not sure there’s any strategic advantage, beyond that which comes with the conference having the best product and the biggest markets.

But the list of new arrivals adds an unpredictable element to the proceedings.

[email protected]; on Twitter: @wilnerhotline. Jon Wilner has covered college sports for decades and is a top 25 football and basketball voter in the AP as well as a Heisman Trophy voter. He was named Beat Writer of the Year in 2013 by the Football Writers Association of America for his Pac-12 coverage, won first place for feature writing in 2016 in the Associated Press Sports Editors writing contest and is a five-time winner of the APSE. .