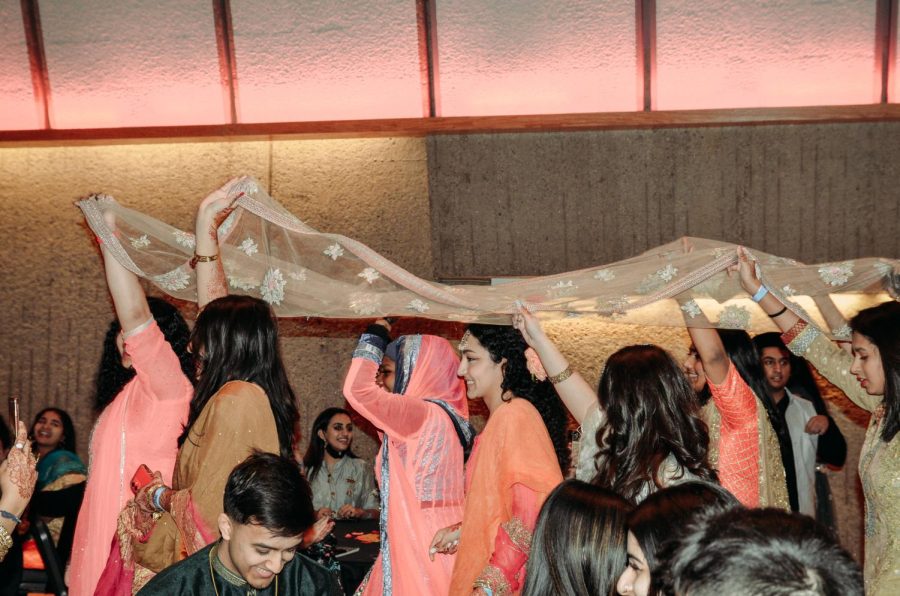 Wearing vibrant dupattas and sherwanis, hundreds of University of Massachusetts students gathered in the Campus Center ballroom on Saturday, March 26 to celebrate the fake Shaadi — a staged Pakistani wedding.

While many registered student organizations held a formal dance this winter, the Pakistan Student Organization (PSO) chose to simulate a Pakistani wedding, known as Shaadi in Hindi.

“Weddings are huge in our culture,” said Emaan Tariq, PSO Senior and President Emaan Tariq. “We thought it was the best way to showcase our culture.”

Maleeha Javed, a first-year psychology major, and Muhammad Abuzar, a finance major, were the bride and groom of the fake Shaadi, symbolically marrying in front of an excited crowd.

“I don’t know how I’ve been able to stay together,” Abuzar said, reflecting on the attention he and Javed have received. “We were talking and I was like, ‘Bro, I’m so nervous. I don’t know what I’m supposed to do.

The night began when Abuzar entered the ballroom on the shoulders of other PSO members, drumbeats punctuating his arrival.

“The tradition is to just be crazy,” Abuzar said of his entry. “You have to do something crazy, fun and full of excitement… Since I’m easy to carry, a friend of mine said to me, ‘Okay, we’ll just carry you.'”

Shortly after the groom arrived, Javed entered the room in a sparkling dupatta, a traditional Desi scarf that the wedding party wears on the bride.

After leading their first dances of the night, Javed and Abuzar took to the ballroom stage, seated on an ornate sofa where attendees took photos with the bride and groom. Javed wore a coral-colored salwar kameez and adorned himself with sparkling chooriyan – bracelets, jhumkai – earrings and a maang tikka – a jeweled adornment of hair draped over his forehead.

“South Asians go out of their way for their marriages,” Javed said. “I’m not even fully dressed like they normally would be.

“Most of the time they have henna on their arms and hands,” she said, pointing to the intricate designs on her fingers. “A lot of times they’ll get on their feet too, I didn’t do that.”

Next to her, Abuzar wore a black sherwani, or formal coat, and a gold pagdi, which is the traditional groom’s headdress for Desi weddings.

“It’s super hard on the head and it’s really uncomfortable, but it looks good,” Abuzar said with a laugh.

“It was a brown food cliche,” Abuzar said. “After the dining room food, it was so good.”

At the end of the event, dancers from Raunak Bhangra from Mount Holyoke College and the UMass Dhadak Fusion Dance Team performed to medleys of Punjabi and American pop music.

The first year, Fawzi El-Kattan heard about Mock Shaadi from the Arab Cultural Association and appreciated how the PSO embraced cultural fusion.

“It’s a great way to bring my Arab side and my American side together while learning something new,” El-Kattan said. “People here have been through a lot of the same things I did as an immigrant from the Middle East.

“A lot of people when they ask my name, they’re like, ‘Oh, where are you from?'” El-Kattan added. “I say Palestine, but people here are all a bit different from the norm here on campus…I really feel like this is a home away from home.”

“I really recommend people to come,” Tariq said. “I feel like there’s this stigma around cultural organizations that you can’t join unless you’re part of that culture – so that’s not the case.

“We want everyone to come, we want people to learn, we want other people to see what our culture is like and enjoy it… We’d love to have you.”

Sophie Hauck can be reached at [email protected]

Who is Julian Caillon in Dancing with the Stars 2022? Biography of Partner Angie Kent