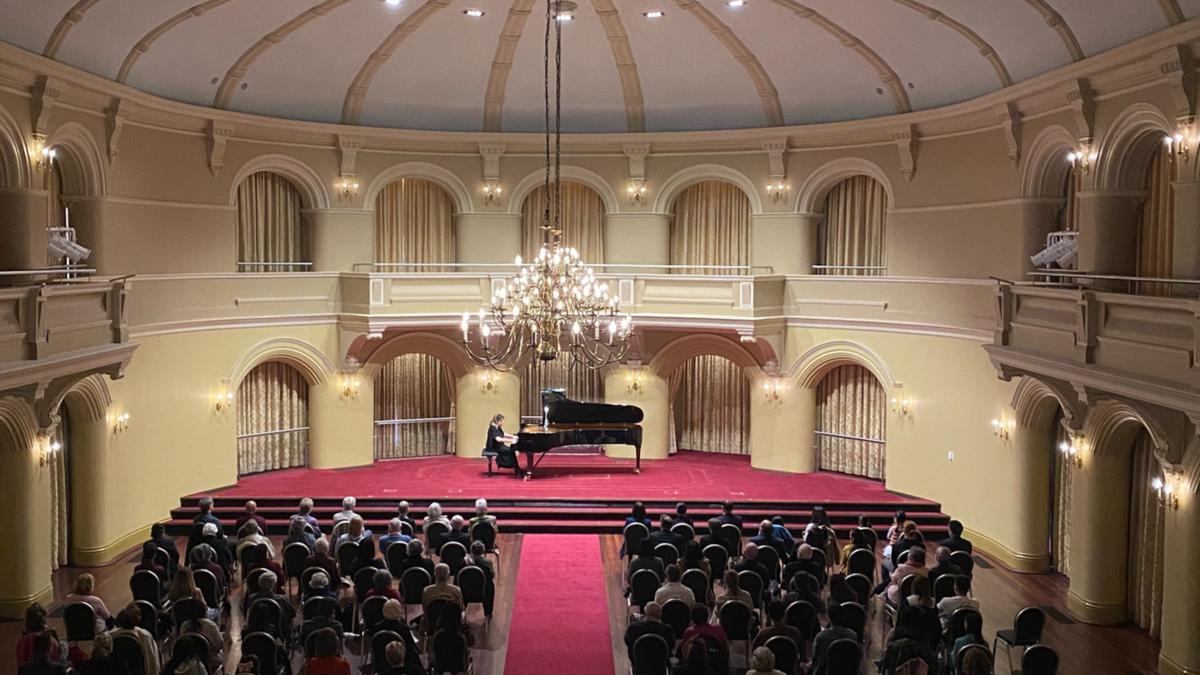 London-based Armenian pianist Seta Tanyel gave a masterclass at the Government House Ballroom on Sunday, an exhibition of technique and performance for the first outing in the Perth Recital series.

Works from Scarlatti to Beethoven to Chopin gradually brought more depth and demands as the piano evolved through 150 years of composition and performance.

Tanyel, a light and modest figure, immediately launches into three Scarlatti sonatas. A tone full of the lightest touch on the resident Fazioli grand piano had fanfare figures ringing clear and true around the majestic venue for the E major work K.380.

The E major sonata K.531 followed with renewed energy, moving into meditation, shuffling and repeating, before the D minor sonata K.141 introduced a frantic right hand then freed the left for a conclusion catchy in booming phrases.

The “Appassionata” sonata was born in a delicate rubato breaking Beethoven’s characteristic intensity with the meticulous touch of a teacher and artist who had reached the heights of her profession. By turns thoughtful and prodigious, each note was played in all its nuance and expression with warmth and brilliance in equal measure.

The Andante second movement begins in an almost reverential tone, sustained phrases evoking an organ mood before rising in brilliance and then returning to the opening mood.

An intimate understanding of a favorite imparted fresh qualities and charm as the Allegro finale built inexorably through scintillating leads and resounding chords to a rousing conclusion.

The briefest pause allowed a reset to Chopin’s Andante Spianato and Grande Polonaise Brilliante, a growling left hand and sparkling right speaking of a mature romantic muse. Again, it was familiar but with a new appeal; nostalgia expressed in the delicate ornamentation of the high register echoed by the warmth of the midrange.

Like a sports champion, Tanyel seemed to have all the time in the world and time itself faded into the background.

An infinitesimal pause gave way to drama in the transition before the Polonaise’s playful rhythm broke through, with tempo variations fully exploited to squeeze the maximum drama out of every phrase.

Schumann is said to have called Chopin’s music “canon, buried in flowers” because of its nationalist sentiment; a thought echoed here in expressive, yet undiscordant firepower. The explosive attack was delivered with melody, winding down in rhapsody then returning in gusts and beautifully romantic flourishes, triumphant in the conclusion.

The piano seethed in the background as the strings warmed the opening of Allegro vivace, the violin duet with the piano while Tanyel maintained precision and verve amidst the depth and harmonics of the quartet.

The second Andante stanza brought more warmth from Tanyel, reflected in all parts, especially through a viola-cello duet in minor mode with violin reflections and an anchored bass.

The third movement of the Scherzo: Presto came to life with a powerfully driving piano as the strings alternately followed and led; an amuse-bouche before the Theme and the Variations of the fourth.

The melodious theme, a staple of vocal lessons, first burst through the strings, graceful and playful, before the piano picked up the tension as the quartet danced presence in arpeggios, trills and double bass.

The violin led the variations, to which the piano then the viola responded, each succeeding like clockwork.

The exuberant and virtuoso piano took over, a perpetuum mobile breaking with high-pitched drama, repeated loud and clear.

The cello weaved its magic over mercurial piano and regular bass; the violin answered in a minor key then returned to the theme over undulations in the piano, fading at the end.

The Finale: Allegro giusto opened like a folk dance, strong in full ensemble before moving to piano, then strings, then recombining. The driving piano summoned more fireworks from the band, then a return to dancing before firing again for a spirited conclusion.

The second in the series of recitals from Perth will feature pianists Anna Sleptsova and Tommy Seah with music by Beethoven, Brahms, Schubert and Skoryk, at a date and venue to be confirmed.

The benefits of socializing for seniors |