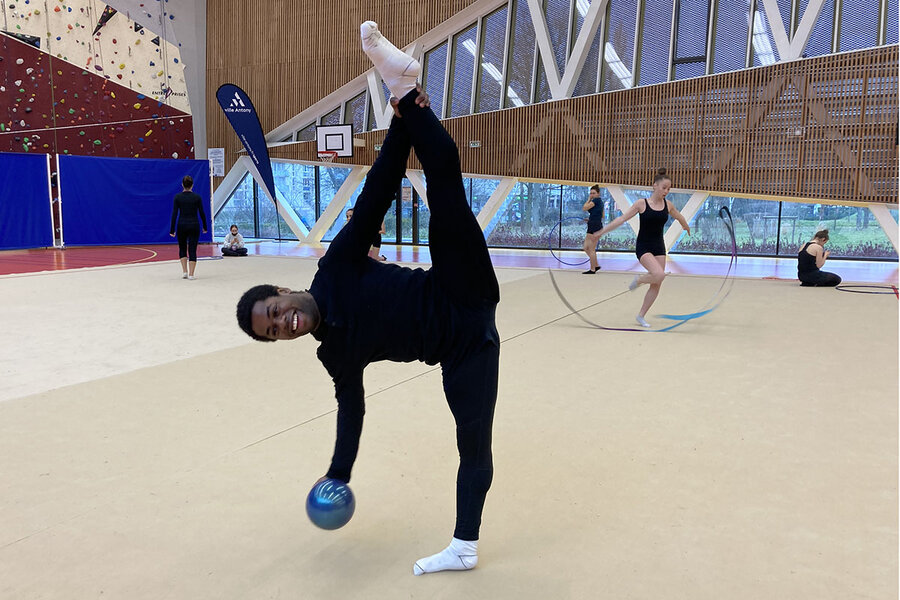 Rhythmic gymnastics: one man’s fight for equality in France

Peterson Ceus is widely recognized as one of France’s rising stars in rhythmic gymnastics. But, as a man, he was barred from the highest levels of competition in every European country except Spain, where he won a championship in 2020.

If he has a say in the matter, that will change. Mr. Ceus alone is advancing the discussion in France on the possibility for men to participate in rhythmic gymnastics. His efforts to make policies more inclusive have so far been rejected by both France’s highest administrative court and the French Gymnastics Federation, which oversees the sport.

Why we wrote this

By creating a space for men in rhythmic gymnastics, Peterson Ceus hopes to shift ideas about what the sport should look like, challenging broader notions of gender.

He nevertheless continues to train for national and foreign competitions. In 2018, he created an association to support his cause. And on weekends, he trains elementary school-aged boys, in hopes that a new generation of male rhythmic gymnasts can one day pursue their dreams.

“I’m sure things will evolve and we’ll get there,” says Ceus. “People are smart enough to see this discussion happening and translate it into action. It’s just a matter of time. »

At a gym tucked away from the hustle and bustle of Paris in the suburb of Antony, a handful of young girls in leotards and leggings are leaping through the air, spinning clubs, balls and colorful ribbons. Among them is Peterson Ceus.

His sturdy, athletic build doesn’t make him a natural for the sport of rhythmic gymnastics – which often prefers a long, classic body – and yet his dynamism makes him one of the sport’s most promising French stars. He is also one of the few men.

But if he has a say in the matter, that will change. Mr. Ceus single-handedly advances the discussion of whether men can participate in the sport of rhythmic gymnastics in France, which only recognizes women at an elite level.

Why we wrote this

By creating a space for men in rhythmic gymnastics, Peterson Ceus hopes to shift ideas about what the sport should look like, challenging broader notions of gender.

“I’ve gotten very used to being the only guy in competitions, but things are starting to change,” says Ceus, who competes at the national level. “If the French Gymnastics Federation can show that it is possible for men to compete, then they will encourage more to join the sport.”

His efforts so far have been rejected; entrenched administrative attitudes have created a competitive ceiling that discourages many boys. Mr Ceus has written to the French Gymnastics Federation (FFGym) about the matter and in 2018 set up a non-profit to bring gender equality to sport.

In October, he took the case to the Council of State, France’s highest administrative court, which also refused to recognize men in top-level competition, saying the lack of a male category n was neither discriminatory nor a violation of his rights.

Nevertheless, on the weekends, between his busy training schedule and his newfound activism, he coaches a class of elementary school-aged boys, in the hope that his fight isn’t just about him – qu a new generation of male rhythmic gymnasts can one day pursue their own dreams.

“The sport of rhythmic gymnastics is extremely feminized, and to have a real discussion about [gender]it will take someone with enormous technical performance as well as charisma,” says David Lortholary, a freelance French sports journalist who has covered rhythmic gymnastics for over 10 years and ran Gymnast Magazine for five years.

“I see a lot in common with synchronized swimming, which used to be very feminized and now includes mixed events for men and women. So it is possible, but it will take patience to make it happen.

Mr Ceus was athletic growing up – horse riding, circus training, rock climbing and dancing. But at age 10, he passed a physical aptitude test in rhythmic gymnastics in a club in the Parisian suburb of Cergy. He had discovered the sport by watching a YouTube video of a Russian gymnast named Marina Shpekht.

Peterson Ceus tried through French courts and the governing body of French gymnastics to have men recognized in elite competitions. His efforts, so far, have been rejected.

“When I first met him, it was this little boy running around,” says Brenda Njitchoua, a coach at the Antony club and the first person to test Mr Ceus in the sport. “I said to him, ‘It’s usually a girl’s sport. You might get teased. But he said, ‘I don’t care.’ He already knew he wanted to do it.

Ms Njitchoua, who grew up next to Mr Ceus, says she spoke with her family to make sure she was on board. “We come from a difficult neighborhood, where you can be insulted or beaten up [for not conforming to social norms],” she says. “I wondered if the stereotypes would destroy him? But it all went over his head.

Today, Mr. Ceus divides his time between two clubs in the Paris region, training largely independently since obtaining his master’s degree in sports management. His coaches, Olivia de Ponte Ramboux and Mauricio Léon, are based in Tenerife in the Canary Islands, and he travels there regularly for more focused instruction.

Mr. Ceus is allowed to participate in women’s competitions, but only up to the national level. Part of his fight with the FFGym is for admission into elite level competitions. In 2018, Mr Ceus wrote a letter to the governing body calling for more equality in rhythmic gymnastics, but was told there were not enough men participating in the sport to create a men’s category; 385 men are now licensed rhythmic gymnasts in France, compared to 50 five years ago.

“All you need for a podium is three people,” says Ceus. “I still find it very strange that France does not yet accept men in sport. We always talk about gender equality here in terms of equality for women. But it’s the same problem.”

His teammates say they don’t see a problem with him or other young men competing with them – they’re happy about that.

“I often hear stereotypes about men competing. It’s very difficult for them to find their place in this sport,” says Celia Sellin, who competes at national level and trained alongside Mr Ceus during seven years old. “It’s very difficult to judge men and women the same way. Women are traditionally more flexible, elegant, while men have more muscle strength and strength. You can’t compare them. There should be two distinct categories competing.

The first Saturday after the winter break, Mr. Ceus is back on the mat at Antony’s gymnasium. But this time, he stands at one end of the floor while three young boys stand in front of him. Mr. Ceus orders them to take good aim and throw their red ropes over his shoulder, then run across the mat to catch them. They take the opportunity to jump and leap as they go.

This mix of circus, gymnastics and dance is why 11-year-old Damien Danel loves rhythmic gymnastics. He’s been taking lessons at another club and has been on Mr. Ceus’ all-boys course since it started in September.

“Peterson is so strong and he’s really nice. We drive 20 minutes to come to his class,” says Damien, dressed in baggy black shorts and a T-shirt, black-rimmed glasses pressed against the bridge of his nose. “The fact that there is a special class for boys shows that this sport is not just for girls.”

Damien’s parents say they have always encouraged him to pursue his passion for rhythmic gymnastics and are proud to support Mr. Ceus’ cause. They have another son, who plays other sports and hasn’t encountered the same friction. The couple have always accepted their differences.

“When Damien was 6, he asked me, ‘Why can girls be tomboys but not the other way around? Why am I weird?’ Said his mother, Diane Danel, after practice. “We told him, ‘You’re not weird. You just like other things. We’ve always encouraged him to do what he likes.’

Get stories that
empower and uplift Daily.

As Mr. Ceus looks to the future, he dreams of men being allowed to compete in rhythmic gymnastics at the Olympics. At 23, he acknowledges his time in the sport is limited, but that doesn’t mean his pursuit of equality for future generations is over. He plans another call to the FFGym. If he can get France on board, it could push other countries to follow.

“I’m sure things will evolve and we’ll get there,” says Ceus. “People are smart enough to see this discussion happening and translate it into action. It’s just a matter of time. »

Can you get a payday loan with a credit score of 550?