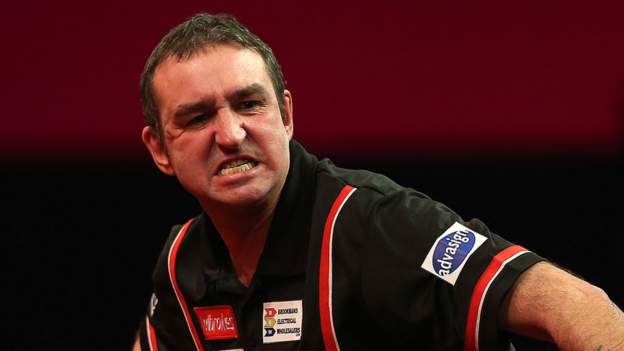 Richie Burnett: The “last dance” of the former world champion on the oche

Former world champion Richie Burnett says he’s heading for a “last dance” on the oche as he prepares to return to the PDC ProTour.

Burnett, 54, picked up his PDC tour card at Milton Keynes qualifying school in January and will be involved when the 2022 ProTour begins at Barnsley on February 5 with the first Players Championship of the year.

Burnett is one hell of a comeback story. He suffered in the past from depression and served a drug ban, while going through Q-school despite having a knee problem that prevented him from walking.

“It was tough. I couldn’t walk for three days before getting up there and couldn’t lock my leg,” he says.

“So when my leg was able to lock again after day one, I thought ‘I have to make the most of it’. I did and was absolutely ecstatic.

“There’s always something wrong with me – that’s the way I am. It gives me something to moan about and in fact it took me away from darts and helped me out. in a crazy way.

“But maybe you have to be crazy sometimes to do these things. Everyone in the darts world will say you’re not going crazy at me, but you’re getting a little closer.”

28 years old not out

Burnett first played darts at the BDO in 1994. He won the 1995 World Championship on his debut, beating current PDC World Champion Peter Wright en route to winning the title.

He started playing PDC tournaments in 1997 and his best result was reaching the Matchplay World Finals in 2001.

The Rhondda Valley Cwmparc player battled depression and hit rock bottom in 2015 when he was banned from sport for 18 months after testing positive for cocaine.

“You’re a little embarrassed thinking about it, but that’s where you were at the time, so there’s not much you can do about it,” he says.

Burnett is no longer there and is proud of how he turned his life around and got back to what he loves to do – playing darts.

“I’m a strong enough person to get by and here I am,” he adds.

“I only look forward and never look back. Maybe this ProTour could be of great help to me or not, but at least I have the chance and that’s what I’m proud of. .”

This isn’t Burnett’s first comeback. He won a tour card at Q-School in 2017 after completing his ban, but dropped out of touring in 2018.

This time, he says he’s in a better place mentally.

“I wasn’t ready to give up darts, I have to try one more time,” he says.

“This is my last dance. As long as I’m doing my best – and training like you wouldn’t believe – I just can’t wait to be there.”

Burnett turns 55 next week but is not the oldest player on the circuit this year – Scotsman Ross Montgomery, 59, also won a circuit card at Q-School.

With all his experience, Burnett is under no illusions about the difficulty of life on tour.

by Wright triumph at the world championship last month at 51 proved that while the talent is there, darts isn’t just a young player’s sport.

“Age doesn’t matter. Experience is everything in darts and I have plenty of that.”

Burnett is a popular figure among the other players, with fellow Welshman and current world number eight Jonny Clayton delighted to see him back on tour.

“He’s one of the darts characters, he’s so funny and he has stories after stories,” said the reigning Premier League champion.

“He’s a friend of mine at darts, but as a player he’s fantastic and for Wales he’s also absolutely brilliant.

“Richie will come out this year with a little bee in his beanie, he will want to do well, so we will have to watch out for him.”

Burnett doesn’t want to set any goals for the coming year.

He admits, however, that he would like to walk the oche again at Alexandra Palace, home of the world darts championship.

Success on the ProTour could lead to qualification for darts’ premier event.

“Hopefully halfway through the year, if I’m in a good position, I’ll see if it’s doable or not,” he says.

“I know it’s hard but I know that if I give 100 per cent I can look in the mirror and say I did my best and that’s all I’m going to do.

“I hope to stay healthy, have a good knee, a good head and have fun and make people laugh along the way. If I laugh too, I know they will.”

Find out how to get started at darts with our special guide.