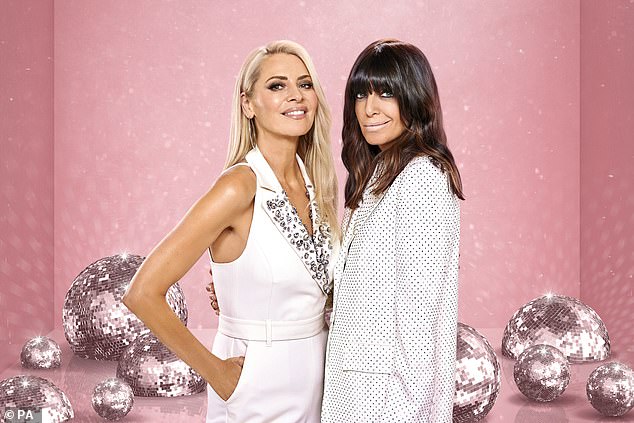 After 20 years on the show, Tess and Claudia from Strictly Come Dancing looked back on their personal and professional lives over the two decades they spent on the hit BBC One show.

The ballroom dancing TV series has seen hundreds of celebrities give 13 weeks of their year to a samba, a waltz, a jive or something in between.

But the show’s two constants have been blonde and brunette duo Tess Daly, 53, and Claudia Winkleman, 50, who celebrated Strictly’s 20th anniversary by reminiscing about some of their most memorable moments.

Duo: After 20 years on the show, Strictly Come Dancing’s Tess and Claudia looked back on their personal and professional lives during the two decades they spent on the hit show

A particular memory for Claudia was when she presented It Takes Two, the midweek spin-off show which sees the presenter getting more intimate with celebrities and their professional partners.

She recalled when she had morning sickness during filming, which led to her having a bucket behind the chair so she could vomit during video breaks.

“I loved It Takes Two, it’s such brilliant work because you’re absolutely immersed in it, but you feel like you’re kind of a renegade and can be quite anarchic,” Claudia said. I’d dance with Len and we’d end up doing polite Rolys! And no one seemed to care!

“On It Takes Two I got morning sickness and there was a bucket behind the chair as I was throwing up every VT which was really a lot for the crew to deal with.

“When my son was one year old, I took him to work and he often hid behind a couch with a toy.”

Speaking about the crew being her “extended family” as she had her two daughters during her time on Team Strictly, Tess Daly explained, “It feels like we grew up together.”

Family: Tess described the crew as her ‘extended family’ as she had her two children during her time on the Strictly team: ‘It feels like we grew up together’

“I was pregnant with my eldest daughter Phoebe during the first series, in 2004, and now she is about to turn 18!

“The team that works on the show is nothing but the best, not only are they the best at what they do, but they are simply the greatest of people.”

“I remember being so intimidated because I was working with the late, great Sir Bruce Forsyth, someone I grew up watching on TV with my family, and it was pure head-pinching” , she said.

“He was such a gentleman and he put me at ease right away by offering to make me a cup of tea.

“He turned on the kettle and made me a perfect cup of tea, and I just remember thinking, ‘Oh my God, he’s like all of us.

“He was so down to earth and so generous with his time and himself, so from that point on I started enjoying the ride.”

Dedicated: A particular memory for Claudia was when she presented It Takes Two, she remembered when she had morning sickness during filming

As for their favorite dances, Tess says her favorite to watch is the Argentine tango, while Claudia prefers to “mow the lawn” when performing the moves herself.

“I pretend to mow the lawn, which is hilarious because I don’t have a garden and I’ve never had a lawn mower,” Claudia said. “But it’s powerful.”

Tess also recounted her own Strictly victory when competing in the Children in Need special in 2008, winning the glitterball trophy at home with dance pro Anton Du Beke.

“But it was a giggle because Anton is a gentleman and a pleasure to work with, so it was fun.

“I remember at the time being so incredibly nervous and really having empathy for our celebrities and what they’re going through with their nerves.

“Being so far out of their comfort zone and doing a live performance can’t be understated, it was frankly petrifying.”

This Strictly series returns to Blackpool – the presenting duo’s favorite week – after a two-year absence.

Claudia said of the return: “Blackpool is without doubt the most welcoming place I have ever been in my life.” It’s all about Blackpool.

“One day, I ate fish and chips four times. I once did a conga with Peter Kay and Rick Astley. And the ballroom is so beautiful and inspiring that it takes your breath away. Tess added that she was excited to return to the northern town.

Daly added, “The ballroom is iconic and the audience is so much bigger than our studio audience, so the atmosphere there is always amazing.” And it’s really exciting to be part of it.

After starting the show in their 30s and now in their 50s, the duo have shared their gratitude for being part of one of the UK’s most beloved Saturday night shows.

“It has been such a big part of my life and that of my family. For 18 years, from September to Christmas, we let ourselves be carried away by the mastodon Strictly.

“Sometimes I have to stop and take stock and think how amazing it is to be part of a show that has been part of the nation’s consciousness for nearly two decades.

“How lucky I am, I never take that for granted and I’m always so grateful to be a part of something that really feels so special to me.”

Strictly Come Dancing continues Saturday at 6.30pm on BBC One and BBC iPlayer

The late great Bruce: Tess Daly said she felt intimidated working with Sir Bruce Forsyth and remembered it was a ‘pinch me’ moment