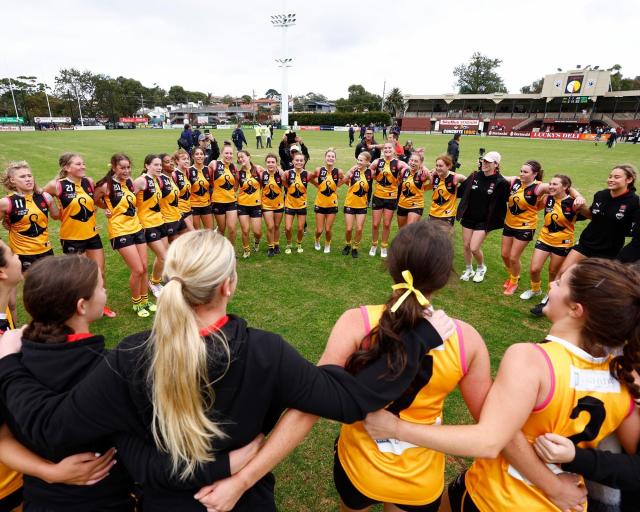 The girls are going to the big ball!

After a sensational home and away season to go along with a great run of finals, the Dandenong Stingrays girls have booked a place in the NAB League Grand Final.

The Rays continued their unbeaten run to defeat the Geelong Falcons at Frankston Park on Saturday afternoon, 7.7 (49) to 3.14 (32).

Dandenong led the useless Falcons through every change and ultimately hung on last term, even though he didn’t make it to the scoreboard.

Amber Clarke led the way for the Rays in eliminations (19), but such was the selflessness of the Dandenong side, was the fifth-best winner from the ball on the ground.

The Rays were on from the first rebound, needing no motivation to hit the first shot in the Grand Finals

The attitude of the group for the preliminary final pleased Rays head coach Nick Cox.

“The environment inside the halls was a bit different, the expectations of being a team that didn’t lose a game were quite high,” he said.

“It was great that they were activated early, I thought it showed when we started the game and the girls never thought they would get the win easily.

It was great to see us walk away with that at the end.

“Thanks to Geelong, the way they stayed in the game, if they had kicked a bit straighter it might have been a different result.”

The Falcons had 14 minor scores, including eight last term.

But wayward opposition kicking seems to be a common theme against the Rays, while Dandenong himself doesn’t often get caught up in the miss kick bug.

Cox addressed this theme by revealing that his daughters understand their distance-from-goal abilities.

“I think the way we distributed going forward makes a big difference, to give the girls the chance to have easier shots on goal rather than a rushing kick from 40,” said- he declared.

“Sometimes the girls were about 40 or 50 (meters), instead of going back, we’re looking for a better option.

“The girls understand that we want to do a play and look good in the moment.”

One of the keys to Dandenong Units’ success is the players’ willingness to play a role that may not be flashy and sweet, but one that guided this team to a grand finale.

Felicity Crank and Olivia Robininson have had 18 tackles between them, and as Cox explains, they’re just two that are all in the Rays mantra.

“You must have been in the room before the game because that was the first word on the board: selfless,” he said.

“It’s been a big priority for us, every week most of the major elimination winners, there’s usually not a lot of Stingrays at the top, we have an even spread across the board.

“It’s a nice aspect, especially in the NAB League, girls and boys can be a bit individualized sometimes.

“But the importance of developing as a team is something that we as coaches are really happy about.

“I’m sure it’s a big priority for most NAB League regions.”

That Rays side has been through it all. Playing across the state, having sprinklers during matches and effectively being homeless, training out of the old St Kilda site in Seaford, as the cricket season crosses the Shepley Oval timeline.

But it all counts, and it’s something Cox couldn’t be more proud of.

“It’s a big word, resilience, we traveled all over the country with these girls,” he said.

“We went to Craigieburn, Churchill, a few games at Seaford, one at Frankston yesterday – which was great.

“The resilience and I guess the girls don’t complain about what they can’t control, I guess that’s a good thing they keep going.

“They train hard, challenge each other, we had few problems on and off the pitch, but we solve them as a group.

“The most important thing is that they are not only good footballers, but are maturing and developing as humans who will step out into the real world once they leave our program.

“I’m sure they will perform well, which is a credit to their youth clubs, their parents and themselves.”

The Rays travel to Werribee to take on the Western Jets in the NAB League Grand Final on Friday night.