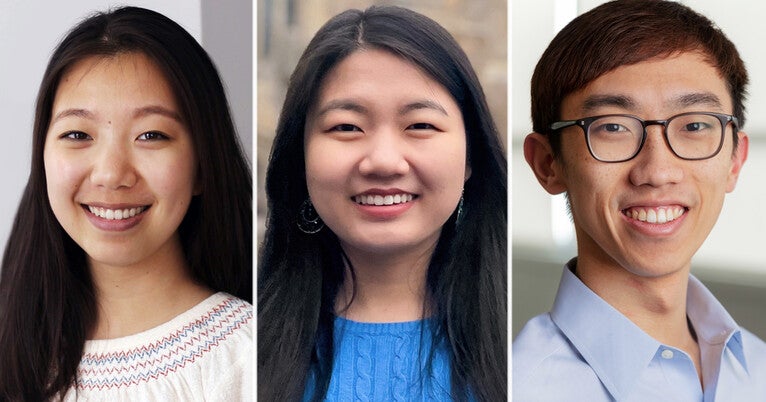 Two seniors and one alumnus are selected as Churchill Scholars

Two Yale seniors – Megan He and Sarah Zhao – and alumnus James Diao ’18 are among 18 recipients of the prestigious Churchill Scholarships for the 2022-23 academic year.

The scholarships support one year of master’s study at Churchill College, University of Cambridge, funding full tuition, a competitive stipend, travel costs and the opportunity to apply for a $4,000 research grant.

Yale is the first institution to have three Churchill Scholars in a single cohort.

Established in 1963, the scholarship scheme was created at the behest of Sir Winston Churchill as part of the founding of Churchill College, Cambridge, a science and technology-intensive college named in his honour. It aims to deepen the US-UK partnership to advance science and technology on both sides of the Atlantic to ensure future prosperity and security.

Megan He is majoring in Environmental Engineering and Global Affairs at Yale, where she will also receive a Certificate in Energy Studies. His undergraduate research in the lab of Drew Gentner, Associate Professor of Chemical and Environmental Engineering, focuses on emissions of organic compounds to the atmosphere and their impact on air quality. She has also conducted research on atmospheric deposition at the École Polytechnique Fédérale de Lausanne in Switzerland. In 2021, she was awarded a Goldwater Fellowship.

At Yale, she is president of the county environmental engineering club, engineering tour guide and STEM representative in the Office of Undergraduate Admissions, and peer tutor in the physics department. She is also active on the Goldwater Community Executive Council and the Evolutions After School program at the Yale Peabody Museum. At Cambridge, she will explore science policy in relation to air pollution, climate and energy. After Cambridge, she plans to pursue a PhD. in environmental engineering.

Sarah Zhao is pursuing a joint BS/MA in Statistics and Data Science at Yale, as well as a double major in Mathematics. Her main research interests are in the theory and development of new data science methods for complex real-world data, and she has worked on quantum information and computing research, statistical theory, optimization and methods. of geometric and topological data science. She also won a 2021 Goldwater Fellowship and is a member of Phi Beta Kappa.

Outside of research, she volunteers with the Yale Education Tutoring Initiative and dances in the Yale Movement. At Cambridge, she will pursue an M.Phil. degree in advanced computer science with a focus on machine learning.

James Diao graduated magna cum laude from Yale, majoring in statistics and data science, as well as molecular biophysics and biochemistry. He is now a third-year medical student at Harvard Medical School and the Massachusetts Institute of Technology. At Yale, he developed tools for extracellular RNA analysis in the lab of Mark Gerstein, Albert L. Williams Professor of Biomedical Informatics at Yale School of Medicine, and he performed with the dance crew of Yale Ballroom. He was also a peer counselor for the undergraduate-run Walden Peer Counseling. Diao’s research has been published in the New England Journal of Medicine and JAMA, featured in Nature and Science, and cited in national guidelines for kidney care.

He is a 2021 Paul and Daisy Soros Fellow and was named to the 2022 Forbes “30 Under 30” list in the healthcare category. As a Kanders Churchill Scholar, he will pursue a Masters in Public Policy at the University of Cambridge.