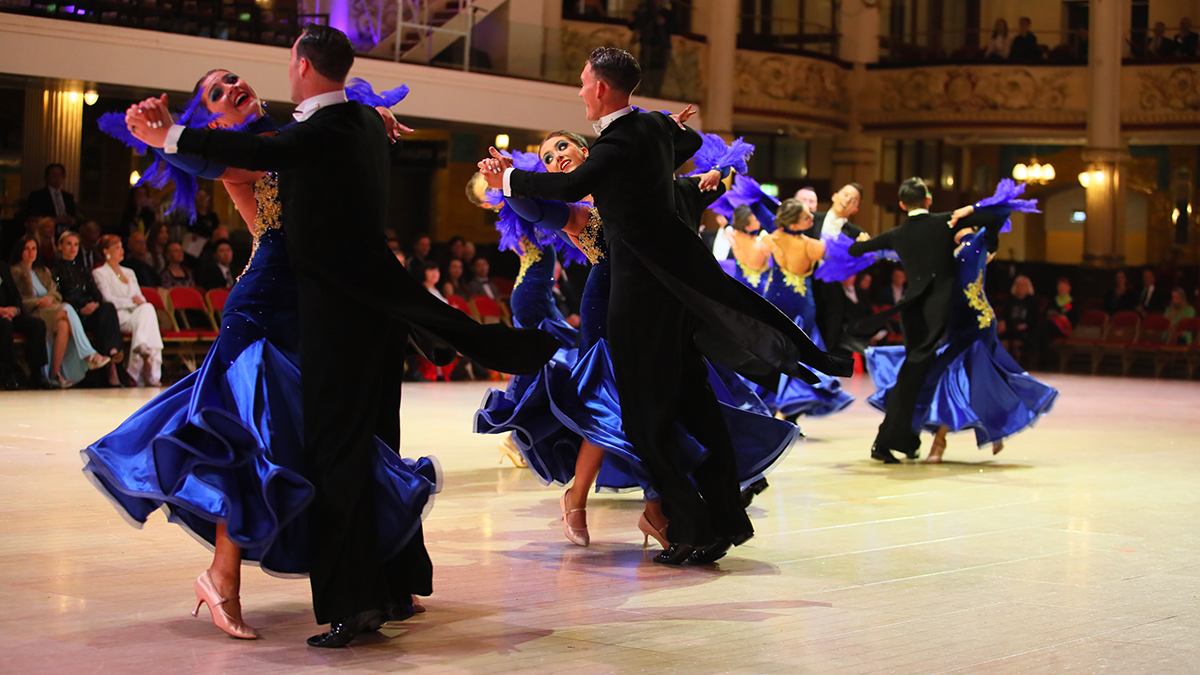 The University of the Valley of Utah (UVU) Ballroom Dance Company placed first in the Latin Formation and Ballroom Formation competitions at the Blackpool Dance Festival in Blackpool, England in May . With Latin mix choreography from Rick Robinson, Kayci and Casey Treu and standard mix choreography from Andres and Veronika End, the UVU company beat teams from England and the Czech Republic. They already have four title-winning competitions, but this is the first time they’ve won both the Ballroom and Latin titles in the same year.

The Blackpool Dance Festival is a prestigious ballroom competition which began in 1920 at the Empress Ballroom in the Winter Gardens in Blackpool. The competition invites participants to compete in ballroom dancing and Latin American dancing. It is widely considered the “World Cup” of the ballroom world.

Tara Boyd, UVU Ballroom Dance Artist-in-Residence, has been teaching at UVU since 2005 and coaching the tour team since 2015. Having never seen the team achieve two wins in one festival, she is thrilled for her students as they add this set of awards to their ever-growing trophy case.

“I’m so excited,” Boyd said. “It’s a dream come true to be able to claim first place in such a prestigious competition in both events.”

The team arrived in Blackpool on May 28 and spent a few days recuperating from jet lag and rehearsing in the competition space of the Empress Ballroom at Winter Gardens, where Blackpool’s competition is held each year.

“When we first walked into the ballroom everyone was in awe and you could feel the excitement everyone had,” said Collin Williams, who has just completed his final year with the team. . “The conservatories are outstanding and it’s just beautiful. So coming in takes your breath away.

In addition to the morning rehearsals, the dancers reserve time during the day to meet either in the hotel lobby, or in the lounge, or even in the parking lot to tighten their numbers. They also watched videos they recorded as a team to identify areas for improvement. According to Grace Knox, standard mix dance captain and recent UVU graduate, all the dancers were eager to work hard and keep the energy positive and encouraging.

Boyd said groups and their routines were judged on the quality of the dancing. The judges paid particular attention to the technique of the dancers, the cleanliness of the lines and the unity of the teams. Music selection, costumes, and grooming also played a role.

This year, Boyd said, the competition still had some COVID-19 regulations, so dancers weren’t sure they could compete until about a month before the event. She is proud of the students who persevered through uncertainty.

“It takes a lot of work, a lot of overtime,” Boyd said. “I think that’s one of the reasons they won. They just kept believing it would happen and kept working hard – and it happened.

“Winning was a hard experience to describe,” Knox said. “It’s a moment when you realize that all the hard work, blood, sweat and tears you’ve invested over the past year have finally paid off. There’s a tremendous sense of accomplishment that comes with the championship title, as well as a special bond that is shared with my teammates. We all worked so hard and put in countless hours to achieve this victory. Needless to say, there were many tears of joy this that evening.

To learn more about the UVU Ballroom Company, visit their website.