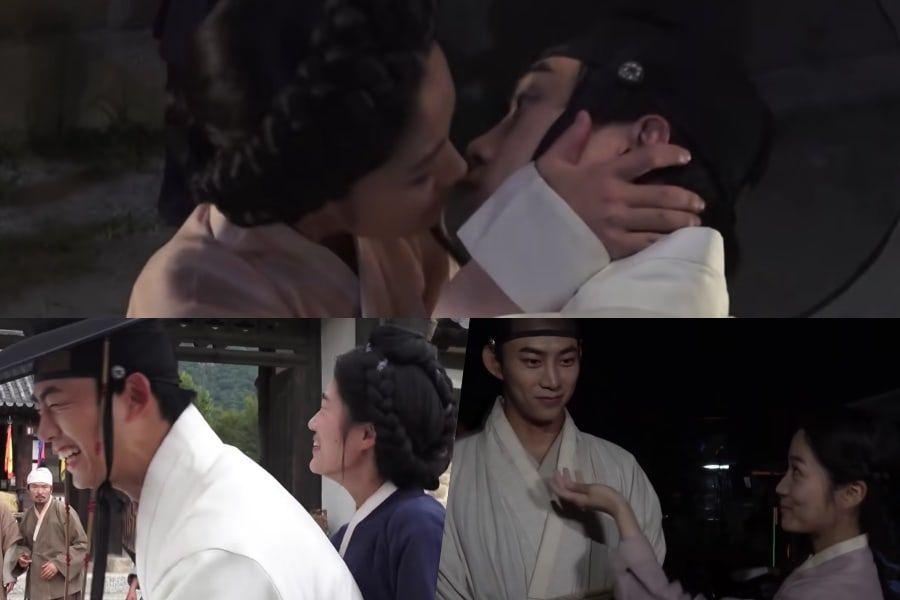 Watch: 2PM’s Taecyeon has tears in his eyes as he shoots a kiss scene with Kim Hye Yoon in “Secret Royal Inspector & Joy”

The video opens with Kim Hye Yoon focusing on rehearsing her lines as her co-stars comment on how cute she is. When filming the scene of Kim Hye Yoon jumping onto Taecyeon’s horse back, the two immediately burst into laughter, illustrating the fun and comfortable atmosphere on set.

Taecyeon then films an action scene with Lee Joon Hyuk, and they laugh at training with fake wooden swords because it doesn’t look the same. They try again with real ones, but Taecyeon surprises everyone and makes them laugh by breaking Lee Joon Hyuk’s sword. He jokingly adds, “That’s why I said I wasn’t going to do it!”

Next, Lee Joon Hyuk, who plays the Crown Prince, talks about his special appearance. He introduces himself and comments: “I am proud to have been able to work with Taecyeon. I think he has a really good personality, so I have fun while filming.

While filming a dramatic scene together, Taecyeon adorably comments like a true idol, “Did that sound too much like an ending fairy?” He jokingly adds: “I had high expectations, but I’m really disappointed because [Lee Joon Hyuk] did not laugh.

Before their night shoot, Kim Hye Yoon and Taecyeon joke with the camera. Taecyeon asks, “What kind of dance does Hye Yoon dance?” as she timidly attempts the choreography of 2PM’s “My House”. Taecyeon continues, “To the person who guesses correctly, we’ll give you a nice prize,” and Kim Hye Yoon asks, “What kind of prize are you going to give? How are you going to give it to them? Taecyeon casually replies, “tvN will find out.”

The end of the clip features Kim Hye Yoon and Taecyeon filming their kiss scene. When Kim Hye Yoon tries to rehearse, Taecyeon keeps pulling faces at her, making her jokingly scream, “Headmaster!” Please come and try to sit here. Once they’ve perfected all of their angles and filmed the scene, Kim Hye Yoon notices the tears in Taecyeon’s eyes and exclaims, “Why are you crying!”

Watch the full video below!

How does this article make you feel?