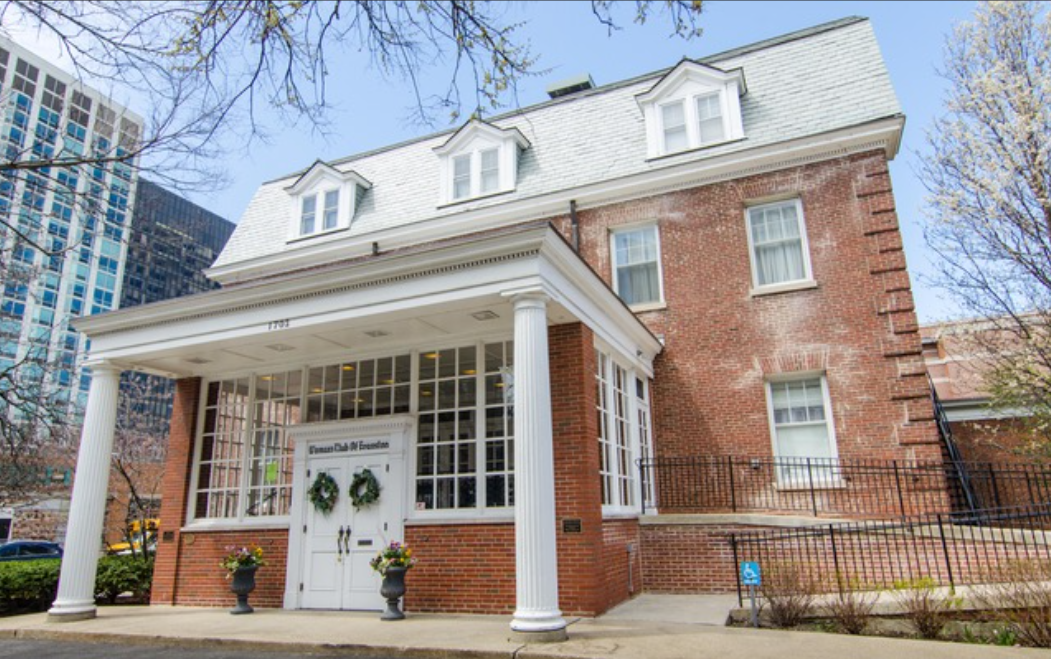 The Woman’s Club of Evanston, established in 1889, initially had no permanent home and members met at each other’s homes. Almost 25 years later, they moved into the red brick clubhouse that sits at 1702 Chicago Ave. Landmark status had to wait 93 years, but was awarded in 2006.

Since the construction of the current building in 1913, it has undergone various renovations – repurposing rooms, remodeling and redecorating. The recent closure of the club during the pandemic has brought an unexpected opportunity: to do the necessary work and make some overdue changes.

The Woman’s Club is a non-profit organization, providing thousands of hours of volunteer service and awarding hundreds of financial grants to local organizations in need. The club offers events and programs throughout the year, as well as social functions for its members.

The Chicago Avenue portico, with the curved “drop-off” driveway, was expanded and closed in 1966, becoming the club’s main entrance. Now that entrance has been painted white, the stairs carpeted, seating provided to make it “feel” part of the interior.

Further inside, one walks over a beautifully restored white marble floor, past a table adorned with white orchids, and into a newly refurbished hallway with neatly hung and grouped paintings.

The club’s artwork was restored 15 years ago. The Woman’s Club has a small but fine collection of outdoor landscapes and traditional portraits of women, some of which date back to the turn of the last century. Among the prints are an Audubon and two by Walter Burt Adams of Evanston, one of which I had never seen before, poignantly titled Sunday Morning – My Farewell to Evanston.

In the Tea Room, the main room on the first floor, a state-of-the-art audiovisual system has been added, with new lighting to complement the four rehabilitated crystal chandeliers. New carpet is underfoot and everything has been painted that could be.

Toilets always have a limited life cycle. ‘Cause it’s been a women’s club, a men’s washroom was still neglected in the building. Until now, the men were always sent to the basement, in an old, unwelcoming space almost under the stairs. “It was time to look at it all,” said Alicia O’Connor, president of communications, “And we went into the strongest phase – might as well do this, might as well do that.”

The club has hired Mark Lavender of Mr. Lavender Interiors of Memphis, Tennessee and Winnetka. With a background in architecture, chief designer Lavender developed a strategic update plan for the club, examining how the building could provide better service. Changes were a priority and toilets were first on his list.

Jan Hartwell, Past President of the Woman’s Club, led the overall planning process with a committee of dedicated members. Members solicited bids and managed construction and interior design contracts.

The fundraising campaign for the renovations had already been launched, in 2019. The pandemic led to the cancellation or postponement of all club events. Even though they did not have all the necessary funds, the members decided to continue the work. .

On the first floor, a bathroom has been enlarged and a second added – both have individual stalls, are “gender neutral” and are completely accessible. Artwork hangs on the bathroom walls, as it always should, according to this artist.

The south porch, formerly a companionway, has been raised to the main level. The adjoining card room can be the bride’s antechamber, with direct and private access to the larger restrooms. Changeable signs for restroom doors can specify “women only” if a rental event requires it.

Hidden loudspeakers were installed in the music room to the west, along with three new chandeliers. A third unnecessary entrance to this room has been bricked up, creating a focal point for a painting of a young girl that now hangs there. The portrait, which O’Connor calls “haunting,” can be seen as far away as the main entrance on Chicago Avenue.

The Members’ Room in the southeast corner has new furniture and the oldest painting in the art collection. In a display case in this room are memorabilia from the Woman’s Club, including the trowel used to lay the building’s foundation stone in 1913.

The elegant staircase with its newly dark curved banisters has been upgraded with a center rail for added safety and convenience. On the second floor, the old cloakroom and ladies’ toilet now has three new individual cabins to the two that have always existed.

(This reporter used to hang a short velvet cape in the dressing room when she attended Miss Pocock’s official ballroom dancing lessons in the 1950s. Miss Pocock preceded the “fortnightly” lessons which have been run for teenagers for years, sponsored by the North End Mothers’ Club. Does anyone else remember Miss Pocock’s lessons?)

The grand ballroom itself is the final phase of the renovation. The large parquet floor needs to be restored and refinished and the room needs to be repainted. But the stage work was done in December, so the women of the club will be able to put on their benefit revues again. They will be hosting their wonderful “Dreams Delivered” event – clean, beautiful, free prom dresses for high school students, in April.

An elevator was added in 1997, providing access to all three floors of the Woman’s Club and the balcony above the ballroom. The proud parents used to watch their offspring dance across the floor from this height. The balcony also provides additional seating for annual reviews and popular events.

“Members have always been generous, willing to open their wallets and donate to keep this beautiful building,” said O’Connor. “But this time, we benefited from a generosity in addition to that of the members of the club: the Romano Brothers & Co. and the Tawani Foundation of Jennifer Pritzker graciously contributed to the project.

Evanston is proud of this beautiful building, its historic designation and the history of the club. Probably at its peak, when similar clubs were sprouting up all over the country, membership was 1,200. Now it’s more like 300, but there’s room for 100 more.

Put on the dancing shoes: The Tribune India