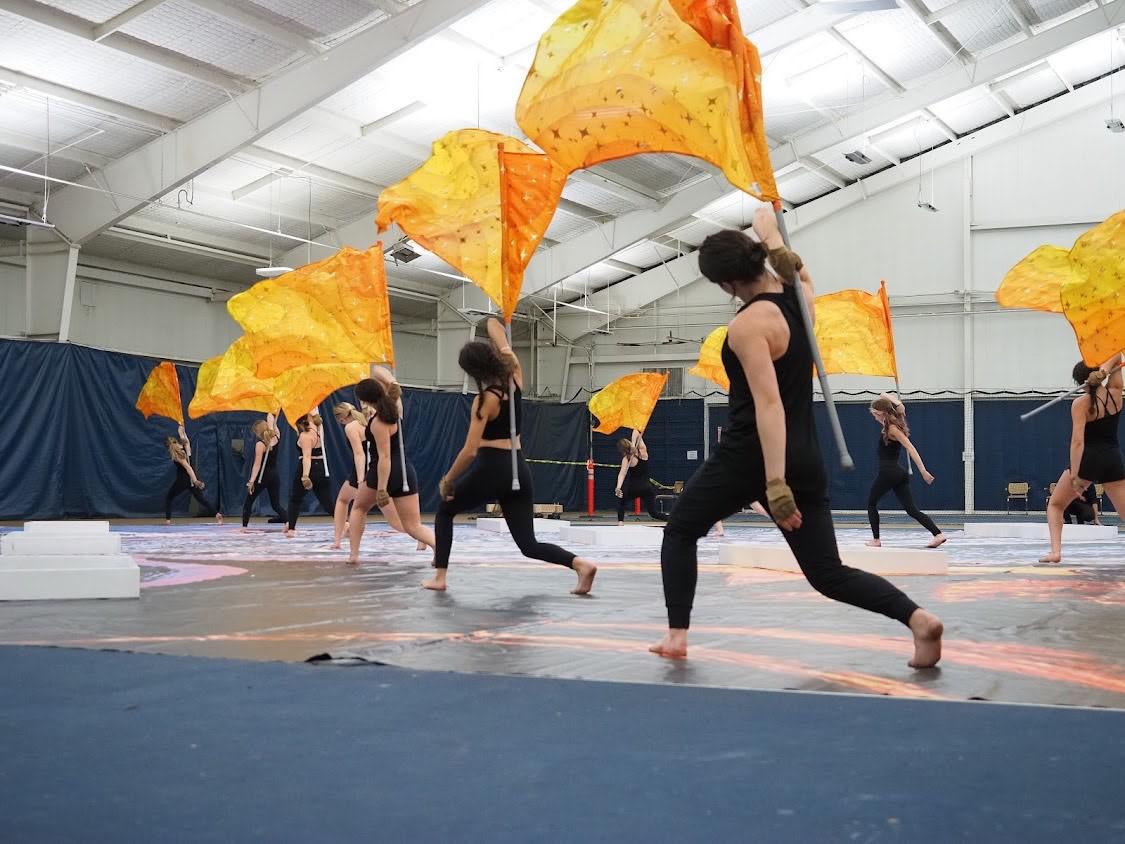 This year was not originally meant to be a competition year for The Woodland High School Color Guard, but the pandemic changed the schedule and the team arrived ready for the World Championship. Last month, Team TWHS placed third at World Scholastic at the competition in Dayton, Ohio.

Typically the team competes every other year and 2022 was supposed to be a slow year but since the team couldn’t go last year there was a fundraising campaign to get them to the worlds this year for the competition from April 7 to 9.

“The goal for the year was to do something fun and crowd-pleasing,” said Cynthia Robbins, director of TWHS Color Guard. “There really is nothing quite like competing in world-class finals and in a big arena full of screaming people.”

It’s an indescribable energy,” Robbins said of competing at the world championships. The team made world finals for the first time in 2019 and came in 14th place. Returning to the World Finals, the team was looking to top their previous ranking.

“At the start of the season it wasn’t about going and being near the top wasn’t really on our minds, it was just going to the final, playing as late as possible,” Robbins said.

The team is the first to medal in Scholastic Worlds in part because it is difficult to maintain a team in Texas that can be worlds ready due to training rules that limit the number of hours that a team can rehearse.

This year’s TWHS Color Guard performance was inspired by The Doors with the aim of creating a high-energy, crowd-pleasing piece.

“You never know when your design is going to work in your favor and it worked really well this year,” Robbins said.

Ella McFarlane, a TWHS senior who has been on the team for five years and is a senior captain, was part of the team that went to the world championships in 2019.

“To be able to go twice was such an honor,” McFarlane said. “Our team has grown so much since 2019. To go into a year where everyone is so excited because it’s been three years since nobody’s seen a color guard, so we went there and it was at a level of excitement so much higher.”

Payton Gwynne, a senior at TWHS and senior captain this year, joined the color guard for the simple reason that she loves tossing her lacrosse stick in the air and catching it when she’s bored. But his trainer was not a fan. Then she discovers the color guard.

“They throw things in the air. That’s what I do, that’s what I want to do,” Gwynne said. “I joined it just because they’re throwing it and I think it looks really cool and they’re dancing under it, and that’s why I signed up.”

What she found instead was a sport she loves. It was her first year heading into worlds with color guard and she wasn’t sure what to expect, which only added to her excitement.

Like Gwynne, Ashlyn Kennedy, a senior and senior TWHS captain, joined the color guard after watching the team play. For Kennedy, who hadn’t really found a sport or activity she was passionate about at the time, it was love at first sight and she tried out for the team at McCullough Junior High.

“It was the first sport I really got into,” Kennedy said.

All three senior captains are feeling bittersweet and nostalgic about ending their high school color guard careers. But they also feel incredibly proud of their team and this season.

“The team has grown so much, we’ve gotten to watch it grow, and we’ve grown with it, and we’re all different people, I think, for the better since we joined,” Kennedy said.

The team is already preparing to return to competition in 2023 and after returning from the worlds, they held auditions at both McCullough Junior High and TWHS. In off-years, the team travels and performs with the school band.

“It was a lot of fun to be able to watch them take the show and do their own thing,” Robbins said. “We give them the tools, but they take them and they run with them and that’s really why they’ve done so well this year because they’ve embraced it and had fun doing it.”

Dancers strut their stuff at Battle of the Giants