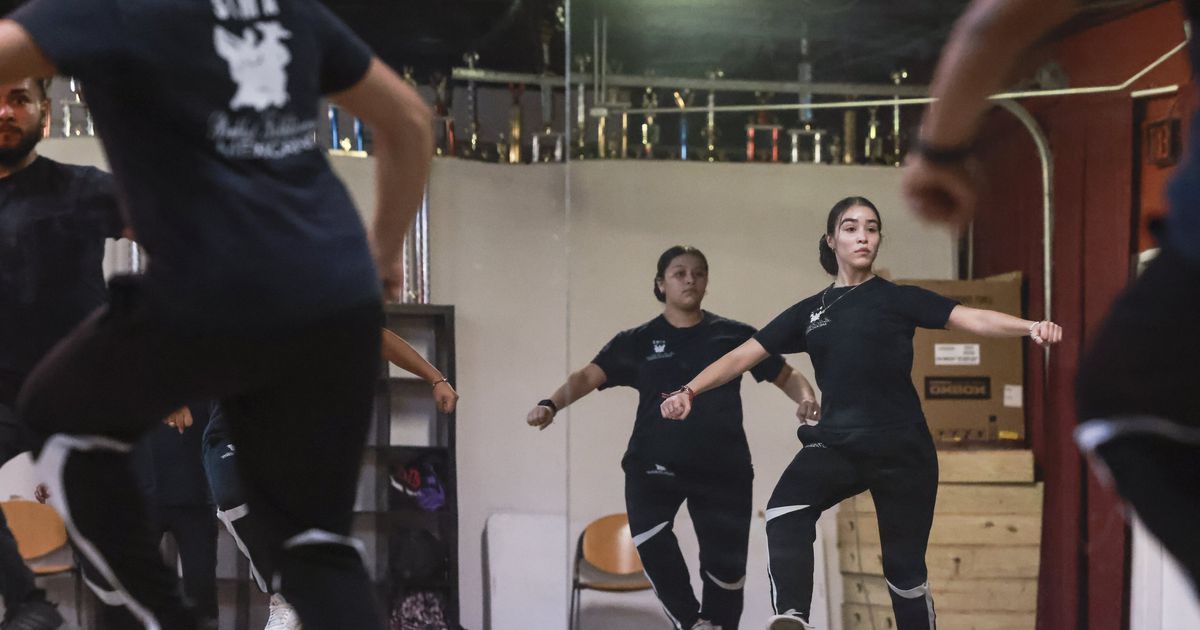 Young Hispanics embrace folkloric dance as a connection to their heritage

Inside a dance studio with floor-to-ceiling mirrored walls, the plywood floor creaks every time the dancers of Ballet Folklórico SIMA stamp their leather-soled shoes while practicing the choreography of Danzón Flor de Azar , a folk song.

The dancing pairs – aged 15 to 25 – move their bodies elegantly, following the swings and turns of the slow rhythm. Their faces barely crack a smile as they focus on mastering every move and the rhythm of the music.

“Vamos, parapa, pam, pam, pam, à la izquierda and ahora à la derecha. Let’s go, guys,” said instructor Christopher Fierro, asking them to move left first, then right and mix English and Spanish as he led the practice in an Irving dance studio on a recent Saturday. Fierro, 22, is both a dancer and a teacher.

These dancers embrace folkloric dancing not just as a hobby or activity to make new friends, but because they see dance as a way to connect with Hispanic culture and their family history. As the Latino segment of the population becomes the largest majority in Texas, folklóricos ensembles are one of the symbols of the cultural influence of Mexican traditions in the state. In Dallas County, at least 36% of the population is Mexican or Mexican-American, according to the US census.

Many of the dancers are second or third generation Hispanics who have fallen in love with folklórico. For some, the dance academy is also a place where they can learn or practice Spanish.

Why Every Dallaser Should Know About Anita N. Martinez’s Contributions

Fierro mixes the two languages ​​while explaining the dance moves for each song.

Learning dance moves can be difficult, so Fierro tries to make sure fluency or language preference isn’t an obstacle.

“If I have to speak to them in ‘Spanish’ so that they feel comfortable and understand me, that’s fine. I have to put myself in their shoes. We want them to feel comfortable here, so they can enjoy the dancing and learn their traditions,” said Fierro, a business student at the University of Texas at Austin.

Fierro, born in Dallas, has been dancing since he was 3 years old. His parents are from Durango. He credits all the years of folkloric dancing with establishing a connection to his family’s Mexican roots.

He transmits these teachings to his SIMA students.

Alberto Medrano, 18, a dancer with this company, said the folk dance brought a deeper understanding of his family heritage.

“I see dancing as a way to connect with my family and learn more about where my parents come from and all the beautiful things that Mexico has,” said Medrano, whose parents are from Guerrero. , in Mexico.

He was born in Irving and attends El Centro Community College in downtown Dallas.

Medrano became interested in folklórico at the age of 15, after participating as a chamberlaindance partner in a Quinceañera.

During Saturday practice at SIMA, the girls wear their hair tied up in a bun with braided decorations.

Between two songs, the young dancers joke around in the dance studio, which has become their second home, where they spend more than eight hours a week.

But when Fierro demands their attention, their chatter and banter stops.

The practice sessions are not only meant to rehearse their performances, but it is when these dancers imbibe the connection to their family’s heritage and solidify their identity.

“It’s about camaraderie, that’s what I appreciate the most. Feeling at home and knowing my friends are here,” said Marilyn López, 19, a 2021 MacArthur High School graduate.

López, whose parents are from Michoacán and Morelos, has been practicing folklórico for six years.

“Passion and love for dance unites us,” said López, who is also an instructor.

SIMA director Silvia Parra said many parents bring their children to the academy to help them understand their identity and roots.

Benjamin Dominzain, 19, whose father is from Guanajuato, Mexico and lives in Bedford, can attest to that.

“My mom wanted me to dance so I wouldn’t lose my dad’s traditions and language,” said Dominzain, who attends Texas Wesleyan University.

“I started dancing when I was 5, so it’s something I love. I haven’t stopped since, and I don’t want to stop dancing. It is something beautiful.

Discipline and skills for life

At Garland’s Mexico 2000 dance school, young dancers arrive for practice smiling and full of energy, but they can’t get into the studio right away.

“May I come in?” they ask as they arrive, wearing their black T-shirts with a Mexico 2000 logo in red and Cuban heels.

“It’s about teaching them a bit of everything, not just dancing – self-respect, respect for their time, my time, [and] their teammates,” said Alex Palencia, director and coach of Mexico 2000 for 20 years. “Discipline is essential for success in dance [folklórico]and in their life.

Palencia, from Mexico City, said dancing helps children and teens develop many social skills, allows them to express themselves with their bodies, and develops a sharp mind.

During performances, dancers must not only coordinate several parts of their body and obey the rhythm and tempo of the music, but also synchronize their movements with those of their dance partner. It’s about leading and being led on the dance floor.

“It’s good to teach them from an early age, through dance, what teamwork means: everyone shares a responsibility in the success of the dance number,” said Palencia.

Marisol Desiderio said her daughter Jessica, 17, thrived in her schoolwork once she started dancing folkloric.

Jessica attends John D. Horn High School in Mesquite and started dancing about three years ago as an after-school activity.

She cherishes learning the traditions of her father’s homeland, León, in Mexico.

Her mother said she was now a straight student and planned to attend the University of Texas Rio Grande Valley because it offers a folk dance program.

The arts are a window on history.

In this academy, teenagers also learn the origin of each piece of music they dance to.

“They are the ones who will preserve our culture [and] to pass on to future generations, so that they know what everything means,” said Mary Palencia, Director of Mexico 2000.

The academy performs in schools across the state. Members also dance in retirement communities.

History, dance and discipline are the pillars of the education these young people acquire, she said.

“The little things you learn without realizing it is what counts,” said Daniel González, 20, who in early September returned from service with the US military in the Middle East and s went back to practicing the folklórico. Dancing, he said, helps him learn more about “the responsibilities that make you a better young man, and engagement with what you do and with your classmates.” Her parents are from Tamaulipas, Mexico.

He says this activity taught him how to manage his time and how to balance school, work and extracurricular activities.

One dance move and one step at a time.

New on Disney+ this week (US)